A rare intimate night of standup comedy with Eddie Pepitone aka 'The Bitter Buddha', winner of 2020's 'best comedy special' by the NY Times and seen on Bob's Burger's, Rick + Morty and more! With VERY special guest JT Habersaat, deemed 'The Godfather of punk rock comedy' by Chicago Now.

Eddie Pepitone :
https://www.eddiepepitone.com/
https://www.imdb.com/name/nm0672539/
Eddie is a force of nature on stage, switching between social rage and self-doubt. His shows are an energetic combo of calm and chaos, blue-collar angst and sardonic enlightenment. Fans will recognize Eddie from appearances on such programs as 'Rick and Morty', Bob's Burgers', 'Your Pretty Face Is Going To Hell' and many more, with Pepitone's 2020 special 'For The Masses' earning 'best comedy special of the year' by the New York Times. Few comedians working today channel the power of the rant better than Eddie Pepitone, aka 'The Bitter Buddha'.

JT Habersaat :
https://jtcomedy.com/
https://www.facebook.com/jt.habersaat
Deemed the 'Godfather of Punk Rock Comedy' by 'Chicago Now', JT Habersaat has headlined the groundbreaking Altercation Comedy Tour for over a decade. Recently named one of the Interrobang's 'Next Big Thing Comics', JT currently hosts the twice-monthly livestream talk show 'The Road Live' for the Next Week Rocks platform, which has featured guests such as Brian Posehn, Doug Stanhope, Kyle Kinane, Joanna Angel, Chad Daniels, Lydia Lunch and dozens more; JT also curates the annual Altercation Comedy Festival in Austin, Texas, recently deemed 'one of the best festivals in the world' by Vulture.com / New York Magazine. JT has three releases available on the Grammy-winning imprint Stand Up! Records, and will tape his new special in 2021 for 800 Pound Gorilla Records / Warner Music Group. 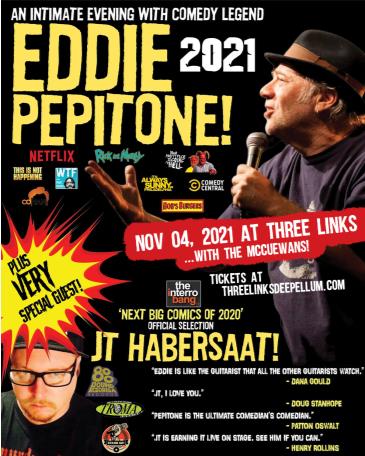