Safehouse Lounge opens at 6pm for 21+.
Concert Hall doors open at 7pm for All Ages accompanied by and adult.
********************************************************************************************************************************************
Even before Echosmith released its debut album Talking Dreams, the Los Angeles alt- pop band had been ascending by leaps and bounds. The Sierota siblings — Sydney (vocals/keyboard), Jamie (vocals/guitar), Noah (vocals/bass), and Graham (drums) — are gearing up for an even bigger 2015 with new single “Bright,” after 2014 solidified them as a truly breakout act with the success of “Cool Kids.” The certified platinum track dominated everywhere, charting in the Top 5 at Hot AC, Top 10 at Top 40, and in the Top 10 of the iTunes singles chart, plus Top 15 of Billboard’s “Hot 100”. The “Cool Kids” video has racked up over 30 million views on YouTube, and the new “Bright” video is set to follow in its footsteps.
The Southern California-born quartet grew up in a musical household, and shared a love for playing instruments and listening to bands as varied as Coldplay, The Smiths, U2, Joy Division, and Fleetwood Mac. Those influences have yielded the melody- minded, New Wave-influenced sound of Talking Dreams, which was produced by Mike Elizondo (Tegan & Sara, Regina Spektor) and earned rave reviews. The band has been featured by the likes of Rolling Stone, USA Today, Billboard, TeenVogue, and ELLE, who dubbed “Cool Kids” as “an ageless anthem.” In 2014, Echosmith were named both an MTV “Artist to Watch” and a VH1 “You Oughta Know” Artist. They were a break-out band at SXSW, where they performed at the MTV Woodie Awards (leading Entertainment Weekly to comment: “Of all the bands looking to make noise on the Woodies, Echosmith seemed most ready to break out”). The band was featured on the fourth season of MTV’s hit series Awkward, having their music showcased throughout and culminating with the band at the centerpiece of a storyline.
In the past two years, Echosmith has toured with everyone from Owl City and Young The Giant to American Authors, in addition to their two Warped Tour runs. They are now out on their first, full-scale headlining tour, continuing to win over new converts to their sparkling songs and dynamic live shows. 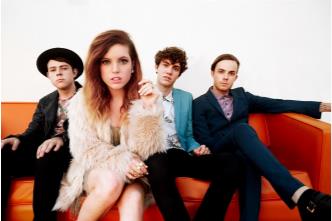