HONOLULU, HI (September 2, 2015) – PepsiCo Inc. announced that their popular nationwide music campaign, known as the Drink Aloha Concert series in Hawai‘i, will feature New Zealand-natives Katchafire, and national recording artist Garrett Douglas, at Wet’n’Wild Hawai‘i. The concert will also include performances by local recording artists Ooklah the Moc. While originally slated to hold the concert at Sea Life Park Hawai‘i, the event has been moved due to a High Surf Advisory that was issued for the area, along with road closures on the east shores of Oahu. Caused by Hurricanes Ignacio and Jimena, heavy rain and wind predicted for the weekend have presented safety concerns which forced event organizers to relocate the concert to Wet'n'Wild.

For the Drink Aloha Concert at Wet’n’Wild featuring Katchafire and Garrett Douglas, doors will open at 5:30 p.m. and the concert will run from 6 p.m. to 10 p.m.

Tickets for the Drink Aloha Concert at Wet'n'Wild are still available online athttp://www.flavorus.com/drinkalohaconcert, as well as Local Motion retail stores on Oahu, or at the Wet'n'Wild box office. Tickets cost $25 for General Admission.

Pepsi’s Drink Aloha Concert Series is part of the national Out of the Blue campaign, an outlet for popular artists to perform at non-traditional venues for one-of-a-kind music experiences. The series aims to unite Pepsi’s foundation of supporting music and its culture with music-lovers for an unforgettable experience through performances and events. Through social media and Hawai‘i’s love for music, the Drink Aloha Concert Series is committed to bringing kama‘aina exciting opportunities to fuel their love for music. 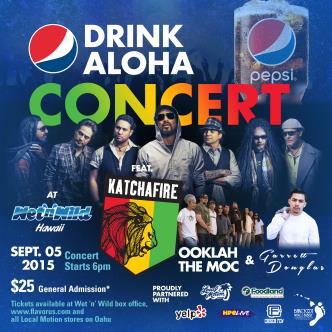