HI Headliners at The Republik

American producer, Andrew Chen aka Shogun, is the first Asian DJ and producer to be signed to S107/Armada. Whether it is remixing for the world's number one DJ - Armin van Buuren, or for Grammy nominated singer and songwriter Nadia Ali, Shogun's productions have gained him full support from the biggest names in the industry including Ferry Corsten, Paul Van Dyk, Above & Beyond, Armin van Buuren, Gareth Emery, and Markus Schulz just to name a few.

With some of the biggest anthems to date, 'Save Me', 'Imprisoned', 'Run To My Rescue' and 'Skyfire', Shogun has cemented his place as one of the most influential and biggest trance/progressive acts today and his songs have regularly been featured on the world's leading radio shows such as Vonyc Sessions, Trance Around The World, Corsten's Countdown, Global DJ Broadcast, and A State of Trance Radio Show - [32 ASOT plays / 5 Future Favorites].

Voted into the DJ Mag 2011 world rankings at #122, and in 2012 Dj Mag Ranking at #68, Shogun has headlined events across the globe and also served as resident DJ for the prominent Ministry of Sound nightclub for over 3 years. His exclusive nine hour sets at the superclub set the standard for epic nights that can only be described as an emotional and amazing journey. These sets were also broadcasted live on Ministry of Sound Radio to thousands of listeners worldwide.

With the constant productions of top quality releases and the DJ skills to rock the best clubs in the world, the future is already written for this rising trance artist.

DSKOTEK is proving to be the people's choice! Winner's of the first Insomniac's Discovery Project in 2012, landing them a DJ spot at the Electric Daisy Carnival in Las Vegas. Then following up with an amazing performance at Insomniac's Nocturnal Wonderland 2012. Performing for thousands at a time, however, is no unfamiliarity for DSKOTEK. They've rocked crowds all across north America, sharing the stage with many of EDM's top producers/Djs.

Release after release, their production has continually landed them spots on Beatport's Top 100 Charts. Dskotek's fan base grows daily with support from more and more artists & Dj's constantly playing their music all over the world. Taking the EDM scene by storm, this LA native duo isn't coming to a halt any time soon!

Bottle Service
Every Package Includes: 1 Premium Level Alcohol Bottle with gratuity included, 1 VIP ticket to the concert for the package buyer, 10 VIP Bottle Service wristbands for friends you would like at your table, your own VIP table + couch area.

Tables range from $450 - $1000 depending on your selected table location. Click on the concert photo above to find the bottle service map to select which table area you would like and purchase that corresponding table above. Questions? Email: info@hiheadliners.com 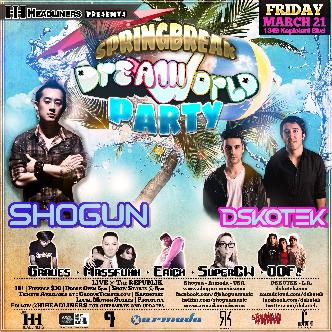