To create his fifth full-length album Start Livin', Hawaii-based singer/guitarist/songwriter Donavon Frankenreiter holed up in a Southern California studio for seven days with his longtime bassist Matt Grundy - and no one else. The follow-up to 2010's Glow, Start Livin' is a nine-track selection of folk-infused songs that sweetly reflect the simplicity of their recording. With its smooth showcasing of Frankenreiter's rich, honey-thick vocals and masterful guitar work, Start Livin' bears all the intimacy of an impromptu back-porch performance and the tenderness of a treasured love letter.

"Start Livin' is basically a love album," says Frankenreiter, who co-produced the record alongside Matt Grundy and Adam Ableman. "Most of the songs are about my wife and our two boys, and the life that we've built together in Hawaii." Thanks to Frankenreiter's infectious warmth and finely honed pop sensibilities, each of those songs has the singular effect of drawing the listener into that bright and breezy world for a blissed-out moment. 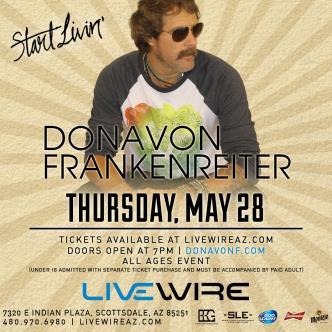