Dom Flemons is originally from Phoenix, Arizona and currently lives inthe Chicago area with his family. He has branded the moniker The American Songster® since his repertoire of music covers over 100years of early American popular music. Flemons is a songwriter, multi-instrumentalist,producer, actor, slam poet, music scholar, historian, and record collector. Heis considered an expert player on the banjo, guitar, harmonica, jug,percussion, quills, fife and rhythm bones. Flemons was selected for theprestigious 2020 United States Artists Fellowship Award for the TraditionalArts category which was generously supported by The Andrew W. MellonFoundation. 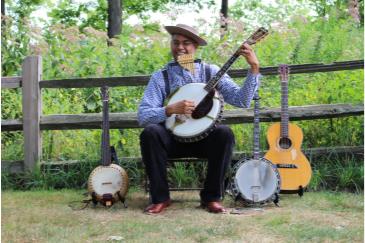