RVCA, Stance at The Republik

Hall doors will open at 6 pm.

Die Antwoord
Translated as "The Answer" from Afrikaans
In 2009 Die Antwoord burst onto the international scene out of the deep dark depths of South Africa. The rave rap duo of NINJA and ¥O-LANDI VI$$ER introduced ZEF culture into the pop culture lexicon,  and pop culture hasn't been the same since.  Early videos "ZEFSIDE" and "Enter the Ninja" racked up a combined 35 million views, the band's website crashed due to the influx of traffic, and no one has been able to look at Pink Floyd's "Dark Side of the Moon" art the same way again. America was calling and in 2010 NINJA and ¥O-LANDI took their maiden voyage to the states. A major label bidding war ensued  and the band ultimately signed a million dollar deal with Interscope records. Hollywood soon wanted in on the ZEF action. ¥O-LANDI was approached to play the lead in David Fincher's "The Girl With the Dragon Tattoo", and NINJA told friend and fellow South African Neill Blomkamp that working together would have to wait when he was offered the role in "Elysium" that would ultimately go to Matt Damon.
Debut album $O$ was released later that year. The band embarked on tours of the US, Europe, and Australia. Selling out shows and spreading the ZEF word worldwide. The music videos, all conceived by Die Antwoord and directed by NINJA, only got bigger and weirder. By the time the video for the $O$ track "Rich Bitch" dropped, it wasn't just a boast, it was fact. A whirlwind 2010 ended with NINJA and
¥O-LANDI teaming up with fellow trouble maker and innovator Harmony Korine starring as themselves  in his short film "Umshini Wam". The short sees NINJA and ¥O-LANDI flex their acting muscles as wheel- chair bound lovers and gangsters.
Not content to rest on their ZEF laurels, Die Antwoord returned in 2012 with their anthem "I Fink U Freeky". Taken from their sophomore album TEN$ION, the song and it's arty black and white video, co- directed by acclaimed photographer Roger Ballen, is an homage to their beautifully freeky world and the legions of fans who now inhabit it. The video currently has 40 million YouTube views. Die Antwoord toured in support of TEN$ION through 2012, with marquee festival appearances including Lollapalooza, Outside Lands Festival, Austin City Limits, and Voodoo Festival. They stepped out from their busy tour schedule to appear in the spring 2012 T by Alexander Wang ad campaign. Videos for "Baby's on Fire"  and "Fatty Boom Boom" were added to the canon. The twisted pastel of "Baby's on Fire" features NINJA and ¥O-LANDI as sexually charged Afrikaner siblings; "Fatty Boom Boom" features a drag Lady Gaga
look-alike being mauled by a lion on the streets of Johannesburg. In total, their videos have over 130 million views and their albums are approaching half a million sales worldwide.
NINJA and ¥O-LANDI will make their long awaited jump to features starring as who else but themselves in Neill Blomkamp's sci-fi film, "Chappie", due out in early 2015. The film is currently shooting in South Africa and also stars Hugh Jackman, Sigourney Weaver, Sharlto Copley, and Dev Patel.
Before they grace the silver screen in "Chappie", Die Antwoord will drop their third LP "Donker Mag" in 2014. To tide fans over, they released the video for "Cookie Thumper" which features a very scary gangster called Anies and a very naughty school girl ¥O-LANDI.
In the breakthrough video for “ZEFSIDE” NINJA is asked what Die Antwoord is the answer for. He replies, "Whatever man, fok." 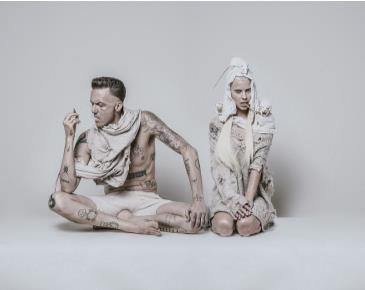