Twenty years ago, Deviates were considered “the future of punk rock.” The South Bay band encapsulated everything that was right about Southern California’s late ’90s/early 2000s punk scene, and they seemed poised to explode after consecutive summers on the Warped Tour and the success of Time is the Distance, their sophomore effort.

A year later, they weren’t even a band anymore.

“At the time, it seemed like being a part of the future of punk rock required devotion to being in a touring band for life, which wasn't really what I think we had intended or what we thought it was gonna be,” says lead singer Brian Barbara. “When we started the band in 1994, we didn’t think that it would be anything. We were just kids playing the music we listened to, and punk rock was the soundtrack to our lives. By the time it evolved and grew to where we were putting out records, life had changed and we were ready to lay it down, and we didn’t know if that would be forever or when we’d pick it back up again.”

As it turns out, 2021 would be the year Deviates picked up their instruments again — and now they’re back with a renewed fire inside of them.

The band’s third album, Holding Out, is a seven-song blast of SoCal punk rock new and old. A combination of recently written tunes alongside tracks created in the early 2000s for Deviates’ ill-fated original attempt at a third album, the South Bay punks’ latest work fuses every bit of melodic aggression that put the band on the cusp of stardom their first go-around with the more intelligent and mature approach that only decades of life experience can provide.

But while Barbara and the band may look and sound a little different now than they did in their early 20s, they’re still fueled by the same rage that fired them up before their 2002 breakup. They’re jumping right back into the spotlight this fall with shows featuring the likes of Pennywise and Dead Kennedys, and they’re more appreciative than ever of the friends, fans, and overall scene that continued to support them through their multi-decade hiatus.

This time around, they’ve got the added blessings of no longer being dumb kids and not having stratospheric expectations or external pressures on the band. As full-grown adults with other careers and families, Deviates is only reuniting because they want to — both for themselves and for everyone who’s been waiting for this moment. It’s a level of freedom the band never knew in their first run, and it has them more excited to perform and create than ever before. Much like how punk rock has continued to persist and reach generation after generation of disgruntled youths regardless of what’s popular on the radio, the group carries a renewed passion for both the music and the people around them — regardless of if they’re old fans or ones that discovered them in the interim.

“Twenty years later, you think you’ll never do it again, but I honestly never stopped writing and never stopped documenting music — and it always ended up going back to punk rock,” Barbara says.

“I was 16 when we started this and I'm 42 now, but there’s always been this common thread for Deviates, which is that we’ve always been representative of the crowd that we play in front of. Twenty years later the heart behind this hasn’t changed.”

Since ’94 Authority Zero has brought their unique blend of anthemic melodic-punk, ska, and reggae tone to the masses. A lot has changed in their 20 plus years since the band’s inception but they have always found a way to persist and thrive in todays ever-changing music landscape. “It’s been a long and adventurous trek”, says Jason Devore (singer/songwriter). The band was formed in Mesa, Arizona by a group of high school friends with ample ambition but no lofty expectations of what the project could become. With the release of their debut album, A Passage in Time (2002, Lava Records), the band’s career gained momentum and they quickly found themselves on the road, touring extensively with acts such as Pennywise, Sum 41, Flogging Molly, H20, and many more. Over the past ten years Authority Zero has gained international acclaim, spending time on the European festival circuit as well as stints in Australia, Russia, Japan. They have released a total of six full length studio albums, many holding spots on Billboard’s Chart and their music has been featured in numerous video games, tv shows, and movie soundtracks. The band’s many successes have been accompanied by a few bumps in the road including a slew of line-up changes, music industry letdowns, as well as having their van, trailer and equipment stolen while on tour in Texas. The secret to their longevity is simple; keep it pure and believe in your music.

Now, 24 years since the band’s inception, the future remains as bright as ever for Authority Zero, consisting of singer Jason DeVore, bassist Mike Spero, guitarist Dan Aid and drummer Chris Dalley. In June of 2018, the guys got back to work at legendary Fort Collins studio, The Blasting Room (Rise Against, Descendents, NOFX) to record their seventh full length album, Persona Non Grata with producer and iconic punk drummer, Bill Stevenson (Black Flag/Descendents/ALL). “The writing process for recording our new album (Persona Non Grata) was simply awesome. The music and lyrical content came together so organically in such a short amount of time given that our last record, Broadcasting To The Nations, only came out a year ago. Mike, Dan, Chris, and I put our hearts into this one and we are all extremely proud of the work we were able to do as a collective. The music and sound are classic Authority Zero but with a slightly revised approach. For the the fans as well as ourselves we strive to give each record its own individual character and life.” Said DeVore.

The new album, Persona Non Grata will be Authority Zero’s first self-released studio album and will be available on December 7, 2018. There will be an album release show on December 8th at the Marquee Theater in Tempe, Arizona. The release of Persona Non Grata will be followed by an early spring European Tour in 2019 and a summer headlining tour of the United States. 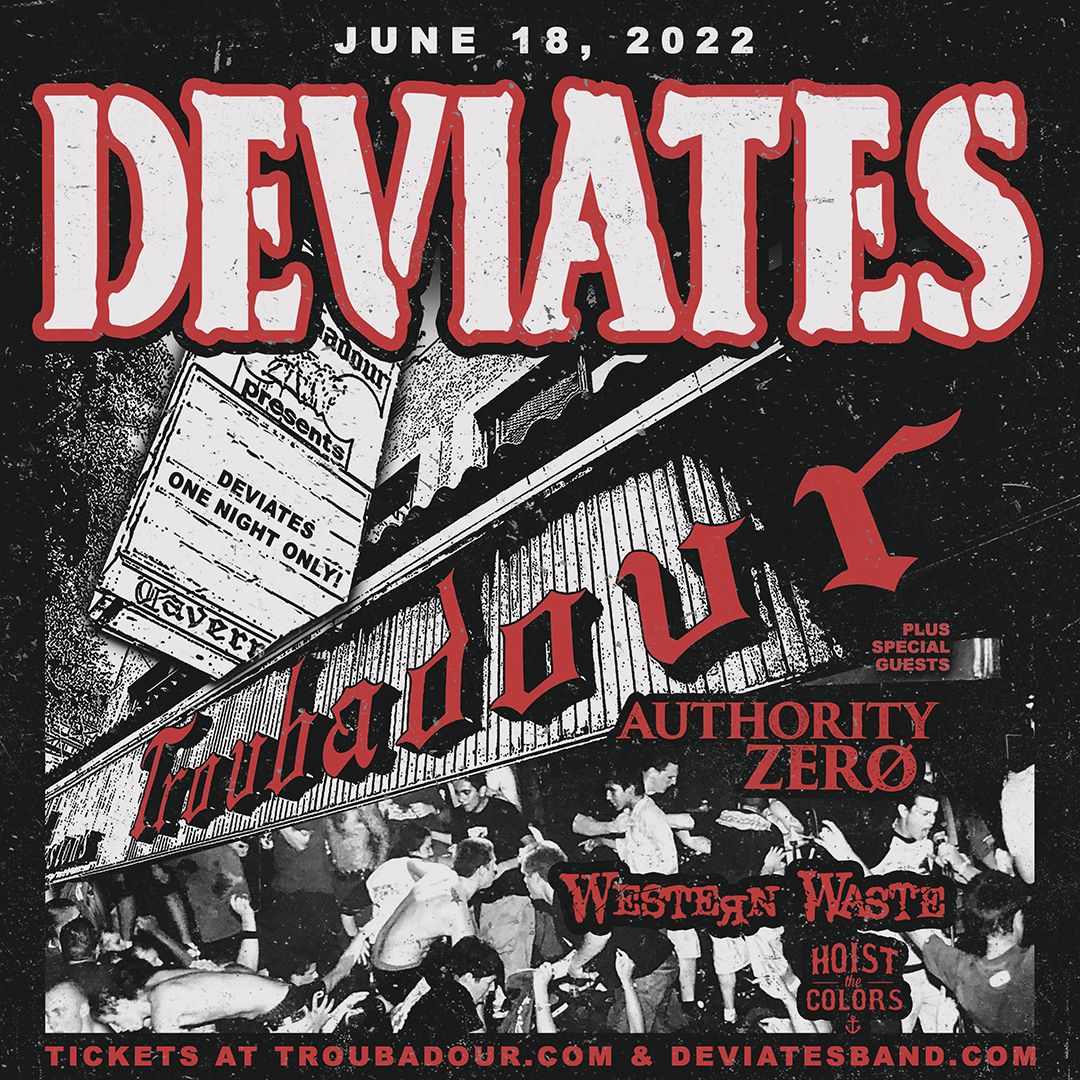