This event has been cancelled due to scheduling conflicts.

Tickets purchased online will be refunded by SeeTickets.  Please return to your point of purchase for all other ticket refunds.

One song can change everything, andafter the release of his platinum debut single “Panda,” 19 year-old SidneyRoyel Selby III went from a local Brooklyn hook-man to a breakout artist with aplatinum, No. 1 Billboard single and a record deal with Kanye West.

“In the hood, I was the man youcame to for the music if you wanted me to spice shit up,” Desiigner says.“Everybody came to me.”

While growing up in Louis ArmstrongHousing project in the Bed-Stuy section of Brooklyn, Desiigner was exposed toall types of music. His parents put him on to old school R&B, while hissister exposed him to reggae. It didn’t take long before young Desiignerstarted to develop his own tastes and find his unique voice.

“I was always a music fan as a kid.As soon as I came out the house, I was singing to the girls,” he says. “I wasthe ladies boy, singing happy birthday and all that. That was my thing, go togirls’ parties and sing happy birthday to them.”

It was all fun and games, but as hegrew older Desiigner found himself running with the wrong crowd and he was shotat the age of 14. The youngster was in and out the hospital the same day, butthe incident led him to shift his focus towards music full time. “I’m not gonnalie, I was a bad kid,” he says. “It was just wrong place, wrong time.”

When Desiigner decided to drop“Panda” in December 2015 on his Soundcloud, the timing couldn’t have beenbetter. The track, which was partly inspired by BMW’s white X6 (the vehicle’sblack tints resembles the color patterns of a panda), became a viral hit. Itgarnered millions of streams, spawned unforgettable memes and countlessfan-made videos on Instagram, Vine and Snapchat.

The track also inspired a number ofunofficial remixes from T-Pain, Fabolous, Lil’ Kim, Lupe Fiasco and Meek Mill.After catching the collective ear of Kanye’s G.O.O.D. Music camp, Desiigner wassigned to the label and to the all-star contributing cast on Yeezy’s February2016 The Life of Pablo LP. “Panda” was sampled and Desiigner’svocals were featured on “Pt. 2,” while the rising rap star also guested on“Freestyle 4.”

“The first time I was in the roomwith G.O.O.D. I gave them the vibe that I was ready to work,” Desiigner says.“Kanye built on ‘Panda’. He had an idea for it. He put something on thebeginning and let me rock out in the end. It was crazy.”

Things got even more crazy in Aprilwhen “Panda” hit No. 1 on the Billboard Hot 100 and thenearned a RIAA platinum certification the very next month. With over 250 millionstreams across Spotify, Tidal and Apple Music.

The “Panda” music video, plusDesiigner’s televised performances on “The Late Show with Stephen Colbert” and“The Wendy Williams Show” prove that the young artist isn’t just great in thestudio, he’s a natural in front of the camera. Now, Desiigner is fully focusedon turning all of his “Panda” success into a legendary career in music.

“Ifyour music sounds great, it’s no problem,” he says. “Music has no law. And anygreat musician knows that.” 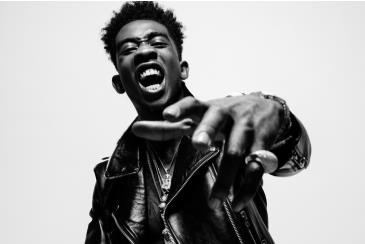