As the worlds most famous Britney Spears impersonator, Derrick Barry hasbeen performing as Britney since 2003. Derrick gained international attentionas an impersonator on “America’s Got Talent”. He has starred on the Las Vegas Strip for over 10 years and featured onthe cover of almost every single Vegas magazine.  Most recently, Derrick has starred onRupaul’s Drag Race season 8.

He made his TV acting debut starring as Julie on USA’s “DIG” in2015.  More recently, he was cast asKimberly in his first feature film, “War On Everyone” opposite AlexanderSkarsgard, due out 2016.  He starredopposite Nick Nolte in “Graves” also out in 2016. His music videos appearancesinclude Katy Perry, Eminem and Olivia Newton-John’s #1 hit “You Have ToBelieve”. 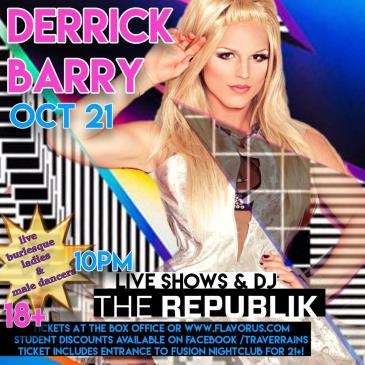