Demetra Dokos is a Greek-American singer songwriter who sings pop music that takes the audience back to the days of Alanis, Jewel and Fiona. She was dubbed the “siren singer” by her fellow musicians when she began writing music and singing acoustic sets in her hometown of Sycamore, Illinois. Raised by immigrants in an often dueling world of the old and the new, her music is often philosophical deeper cuts, with a sprinkle of fairy dust to soothe the listener.
@demyd13
https://youtube.com/user/DemetraLove
Georgia Feroce
Opening with four bars of infectious drums, a distant chorus of ah’s swells and then bursts with Georgia’s voice singing sweetly over reverb guitars, “It’s been a little while, but you don’t know me like you think you do.” The scene is set with a 60s surf backdrop and Georgia, the feminist from the future ready to turn some cliches on their heads. But she’s still a woman living in a man’s world, as much as she tries to fight it. They say if you can’t beat ‘em, join ‘em, so now it’s her turn for little white lies and mind games, and it’s out the window to any lady-like behavior as she tells a potential new beau to get off her metaphorical dick. G.O.M.D.’s smooth bassline and shimmering guitars soften the blow of the singer-songwriter’s trademark brutally honest lyrics. The retro-pop instrumentation and classic three-part harmony get your toes tapping, your hips swinging, and, before you know it, you’re doing a little dance. That’s what GOMD is: a dance between giving in to puppy love and maintaining independence while trying not to step on any toes. Throw in some gender-role conflict, and it’s a party on the dance floor (and the floor is lava).

Christie Huff is a country/pop artist based in LA and Nashville. She has a strong country sound with a dreamy pop vibe. She has opened up for some major artists such as Toby Keith, Jason Aldean, Billy Currington, Kip Moore, and Bebe Rexha. Her songs are featured on many top country Spotify playlists such as Hot Country, Wild Country, New Boots, and more. Her 2019 release “Black and White” has earned over 3 million streams as well as her 2020 releases “Halfway Fell”  and "Palm Reader" have both earned over 1 million streams on Spotify. She has had the opportunity to perform at Whiskey Jam in Nashville as well as was featured on The Ty Bentli Show for his 10 Minute Tune. Christie is currently releasing a new song every 2 months!

Space Nat makes indie-pop music that exists right where the night sky and the horizon meet. Equal parts dreamy and grounded, she sets intimate moments to soaring, emotional instrumentals a la Kacey Musgraves with a little bit of Dawes and some St. Vincent sprinkled in.

A child of Los Angeles and an honorary resident of Nashville, Space Nat lives for a contradiction. She twists her classical training with a singer-songwriter’s vulnerability and her own synth-pop sensibilities. She has played staple LA venues like The Mint and The Hotel Cafe.

Her latest single, “Bug Bites”, unfolds like a starlit vignette. Jacuzzi’s, scars, and quiet reminiscence build into her own full throated confession of “maybe I should have loved you better than I did.” 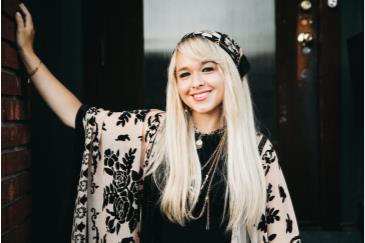