Since their inception,Grammy-winning alternative band Deftones have quietly been pursuing two paths,delivering songs defined by churning, double-fisted aggression while alsoquietly testing the boundaries of music by incorporating elements of psychedeliaand shoegaze. Their platinum-certified, Billboard chart-topping 2000 album White Pony earned raves for blending themoodiness of bands like the Cure and Slowdive, but the group has only gotten moreexperimental since then, evincing a clear restlessness with convention andrepetition. Picking up where 2010's lauded DiamondEyes left off, the group's seventh album, Koi No Yokan is their boldest yet. Both ferociously melodic anddizzyingly expansive, the album moves from pensive to pulverizing – often in thespace of a single song.

"I think one of thethings we were really conscious of was making sure the songs had realdynamics," says front man Chino Moreno. "I love Stephen [Carpenter]'saggressive, chunky guitar riffs, but we always wanted there to be that kind ofyin and yang in the songs – that push and pull between heaviness andbeauty."

That tension is evident insongs like first single “Tempest,” which opens with a tense, pulsing guitar andhushed vocal from Moreno before it's swept away beneath great black waves ofguitar. Its chorus is ominous and otherworldly, Moreno darkly prophesying aboutan "ancient arrival" against thunder clapping riffs. "When westarted the record, we were all joking a little bit about the Mayan prophecyabout the end of the world coming in December of 2012, and I some of thatfiltered into this song, kind of dealing with those ideas a little bit."  Street track "Leathers" also volleysbetween two extremes, opening with a storm of falling-anvil guitars beforegliding into a gorgeous, high-arcing chorus.

For Koi No Yokan, the group reunited with producer Nick Raskulinecz,who also worked on Diamond Eyes. Asthey did for that record, the band set a rigorous daily work schedule. "Wekind of adopted this new way of doing things, where we'd have a 7 or 8 hourwork day instead of just working on things a piece at a time," drummer AbeCunningham said, "It enabled us to be a lot more efficient." Morenoagrees. "In the past, one of us would write something, record it, and thenweeks -- or even months -- later,someone else would come along and add to it. We had totally lost that communalvibe. This time, all of the songs started with just the five of us together ina room, playing." Those close collaborations led to a more deliberatedrive and cohesive final product. "It gave us a real sense of focus,"says Cunningham.

Those moments ofgive-and-take are audible, and the songs are united by a sense of impassionedoptimism. In "Romantic Dreams," Moreno sings "I'm hypnotized byyour name/ I wish this night would never end," and on the surprisinglytender "Entombed," he swears "From the day you arrived/ I remainby your side" over Carpenter's gently spiraling constellations of guitar."I'm talking about being someone's prize that they keep next to them,"he says of the lyrics to “Tempest,” "so it's being alive, but being inkind of a stasis – it's about being someone's possession, but loving to be thatway."

Moreno insists therecord's title, a Japanese term for the notion of love at first sight, is notmeant to be taken literally. "It's really just trying to get at thosetingling feelings that everybody gets from time to time. I just wanted to givepeople a descriptive emotion to work off of when approaching the record."

More than anything else,that's what comes across in Koi No Yokan-- a sense of euphoria. With their forward-thinking, genre-agnostic rock,Deftones ride strange waves of inspiration to always-engrossing,always-surprising ends. The songs are as eerie and ghostly and glimmering asthe Northern Lights – both strange and strangely beautiful, and firmlypositioned at the intersection of blunt force and haunting elegance. Koi No Yokan is Deftones at theirfinest. 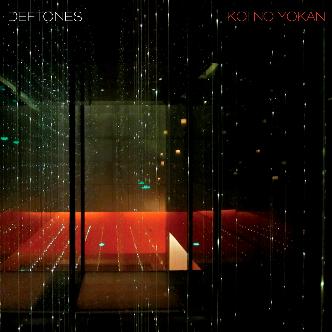