Deep Tropics at The Back Corner

For Spanish housemaster David Penn, 2020 has been business as usual as he continues to throw down the gauntlet to the rest of the global house scene. In a year defined by uncertainty, he seized the opportunity to ratchet his studio output to new levels, culminating in the signing of an exclusive publishing agreement with Defected Music and corresponding record deal with Defected Records.
Ranked #1 house music artist of all-time on Beatstats in 2019, he released two standout tracks on Defected. First came his ubiquitous roof-raising remix of ‘Big Love’, followed by ‘Stand Up’, a supercharged gospel house masterpiece which captured David at his hand-clapping, piano-riffing best. These anthemic tracks paved the way for the afore-mentioned deals, epitomising the unique style and contagious energy encapsulated within a modern-day David Penn DJ set. Captivating audiences with his live keyboard-playing, boundless enthusiasm and infectious trademark grin, the resulting hands-in-the-air moments provide a joyful reminder of the remarkable power of DJ’ing as a performance art.
LP Giobbi

LP Giobbi is the forward-thinking, boundary-breaking artist disrupting dance music today. Widely known for her bass-rattling house beats and electrifying live performances, the Oregon-born, Los Angeles-based legend in the making is a "creative multi-hyphenate" (​Billboard​ ): an inspirational producer, DJ, label owner, curator, music director, feminist, entrepreneur and Piano House Queen. Since first breaking into the scene in 2018, she's become one of the fastest-rising artists in dance music, with both ​Billboard Dance​ ​ and ​Your EDM​ anointing her as an emerging artist to watch.

A new project from Billy Cave & Austin Knight. Inspired by the sounds of Nu Disco, 80s Movies & Synthwave sounds. Based in Nashville, TN. 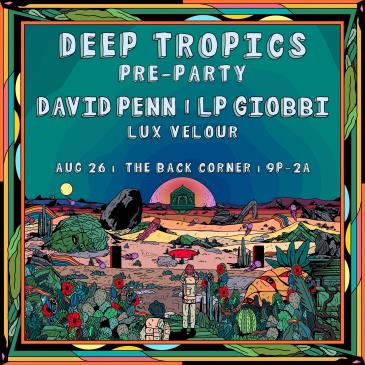