Deep Tropics at The Back Corner

Influenced by everything from his San Francisco hometown to The Smashing Pumpkins, Nirvana and The Prodigy, Luttrell’s unique brand of indie-laced house and techno has seen him gain heavy support from BBC Radio 1, and garner remixes requests from renowned acts Moby, Tycho, What So Not and Jai Wolf. Annie Mac made ‘Intergalactic Plastic’ her Hottest Record in the World, and his productions have been supported by Pete Tong, Kolsch, Joris Voorn, Lane 8 and many more.

Now one of Anjunadeep's leading artists, Luttrell has performed at major global venues, from Bill Graham in San Francisco to London’s Printworks. Within the first two years of his solo career, he supported Above & Beyond, Rüfüs Du Sol, and Lane 8 on their US tours.Q

Born and raised in the snowy city of Sapporo, Qrion takes inspiration from all the environments at her whim with a signature sound that oozes genuine artistry. There’s a reason why she was named on Forbes Japan’s 30 Under 30: Qrion has graced labels such as Anjunadeep, Ultra Records, Last Night On Earth, and more. Qrion proves her mettle as an excellent remixer, too, lending her future-focused sound to artists like Alina Baraz, Catching Flies, Mako, and more. 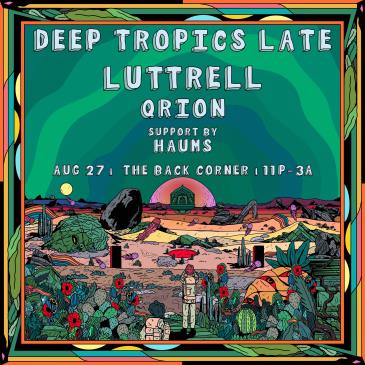