Tickets Available at the Door.

Rock n’ roll has always served as a means to elevate the fringe of society, though it’s accentuated the plights of the outcasts and misfits in different ways throughout the years. In its infancy, rock was a playful rebuttal against segregation and Puritanism. In the ‘60s, it became a vehicle for an elevated consciousness. In the years following the Summer of Love and the clampdown on Flower Power, that countercultural spirit adopted the aggravated and occasionally nihilistic edge of bands like The Stooges, Black Sabbath, MC5, and The New York Dolls. And then as the ‘80s approached, popular rock n’ roll turned into a relatively benign celebration of hedonism and decadence, but that contingent of dark mystics from the ‘70s who lifted the veil and used music as a means of rallying people to altered planes had left their mark. It was an undercurrent in rock that would never die, but would percolate in corners of the underground. Today we can see it manifest in LA’s Death Valley Girls.

The group feels less like a band and more like a travelling caravan. At their core, vocalist/multi-instrumentalist Bonnie Bloomgarden and guitarist Larry Schemel channel Death Valley Girls’ modern spin on Fun House’s sonic exorcisms, early ZZ Top’s desert-blasted riffage, and Sabbath’s occult menace. Their relentless touring schedule means that the remainder of the group is rounded out by whichever like-minded compatriots can get in the van. On their third album Darkness Rains, bassist Alana Amram, drummer Laura Harris, and a rotating cast of guests like Shannon Lay, The Kid (Laura Kelsey) and members of The Make Up, The Shivas, and Moaning help elevate the band from their rogue beginnings to a communal ritualistic musical force. On the surface level, Death Valley Girls churn out the hypercharged, in the red, scuzzy rock every generation yearns for, but there is a more subversive force percolating beneath the surface that imbues the band with an exhilarating cosmic energy.

Death Valley Girls’ sophomore album Glow In The Dark was based on the concept that many of us are trying to become more enlightened, and you can tell by the way they ‘glow in the dark.’ Darkness Rains goes a step further, attempting to shift the consciousness of those that have not yet considered how we are all connected and how that relates to the way we view life beyond death. Those that ‘glow’ can use the songs on Darkness Rains as new chants—or they can be used for pure entertainment. “Songs come from beyond and other worlds, you just have to tune into the right radio wave signal to dial them in. Our signal happens to be in a 1970 Dodge Charger Spaceship,” says Schemel.

Album opener “More Dead” is a rousing wake up call, with a hypnotic pentatonic guitar riff and an intoxicating blown-out fuzz-wah solo underscoring Bloomgarden’s consciousness-rattling proclamation that you’re “more dead than alive.” The pace builds with “(One Less Thing) Before I Die”, a minute-and-a-half distillate of Detroit’s classic proto-punk sound. But at track three, Death Valley Girls hit their stride with “Disaster (Is What We’re After)”, a gritty, swaggering rager that takes the most boisterous moments off Exile On Main Street and beefs it up with Zeppelin’s devil’s-note blues. Darkness Rains retains its intoxicating convocations across ten tracks, climaxing on an astral plane with the hypnotic guitar drones and cult-like chants of  “TV In Jail On Mars.”

“Learn from the stars and beyond! Be happy and thankful we got to live together on Earth at the same time! And death is just a shift—stay alive and awake,” Bloomgarden and Schemel respond when asked for a final thought on Death Valley Girls. “Embrace the darkness and don’t fear the Reaper.” Suicide Squeeze Records is proud to further the cause by releasing Darkness Rains on October 5th, 2018 on LP/CD/CS/ and digital formats. The first vinyl pressing is limited to 1,500 copies. Both the cassette and vinyl include digital downloads.

“In a perfect world, we’d all be comfortable with our bodies. And we’d all be respectful of how other people choose to present and share their bodies with others. For a moment, it seemed the internet could help usher in this perfect world by providing a platform of interaction where physical appearances were a matter of our own invention. But of course, the assholes ruin everything. As soon as cumgirl8 began exploring the artistic possibilities of fusing the URL world with in-the-flesh performances, the assholes had to come in and ban them from social media platforms because of their name. Puritans, TERFS, and homophobes always find a way to impose their bullshit on the gender outlaws and sexual provocateurs of our times. Well, cumgirl8 has had enough of the archaic mores and narrow-minded values.
On their latest single ‘dumb bitch,’ the Brooklyn quartet takes the punk attitude of The Slits and the scrappy after-hours throb of early electroclash and meld it into a dance-floor anthem of defiance and non-conformity. ‘Gender and sexual politics are the overarching points of the song,’ says bassist Lida Fox, ‘but it also gets into how these dynamics play out in a society ruled by capitalism… how the roles we’re expected to play can become toxic and hypocritical to how we truly feel and so often we find ourselves stuck in patterns that hurt ourselves and those we love. It’s exploring the space between romance, masochism, pleasure, narcissism, and the balance of how much we give and take in our relationships.’ So while you feel the four-on-the-floor kick drum, bask in the distorted bass riffage, and relish the squelching synths, you can also flex your head with cumgirl8’s radical call for personal liberation.” 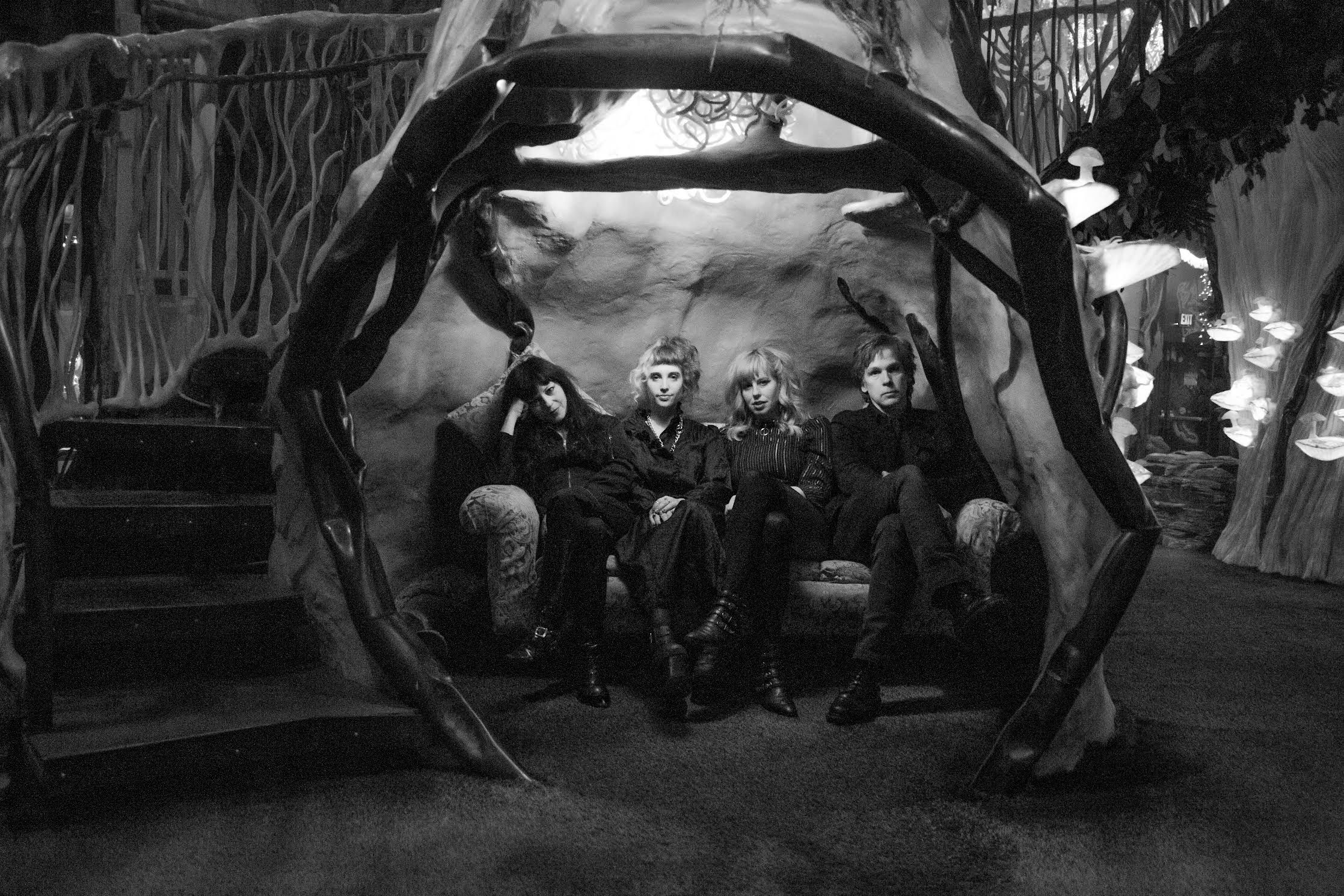