Most Tickets are sold by the table and include:

I.e. if you want to go with you and another person you would only need to buy 1 ticket for "Table & Ticket for 2". That would get you in and reserve that table for you and another guest. We're doing it this way so you are only sat with your group. Limited general admission tickets available.

• All tables are at least 6' apart from one another according to CDC guidelines.

• Venue will be operating at 20% capacity.

Dave Yates is a Los Angeles based comedian, entrepreneur, writer, and actor. Dave performs his stand up comedy nationally while simultaneously selling his own brand of hot sauce called HaHa Hot Sauce. Dave is the co-host of the 12 Questions podcast. Dave’s television appearances include Season 2 of Amazon’s Laugh After Dark, Rain Wilson’s SoulPancake Network, and Kendra On Top on WeTV. In addition, Dave has been a featured performer at comedy festivals across the country such as Gilda’s Laughfest and SLO Comedy Festival. Dave’s comedy has been described as a mixture of whit and whimsy. Wherever Dave performs, laughs and spicy fun times are sure to follow.

With his quick wit to and boyish charm Tyson is a delight to watch. He never takes himself too seriously, often smiling and laughing along with the audience. He prefers to focus on the lighter side of life. Plain and simple, he just wants to make people laugh. He’s performed from New York to L.A., and everywhere in between. He’s been a finalist in St Louis, Bloomington, Dayton, Sarasota, and Indiana’s Funniest Comedian Contest and was a top contender in the World Series of Comedy. He has been seen on Comcast television’s “Trial by Laughter”, and has also performed at some of the top comedy clubs, casinos, one nighters and social clubs all around the country. 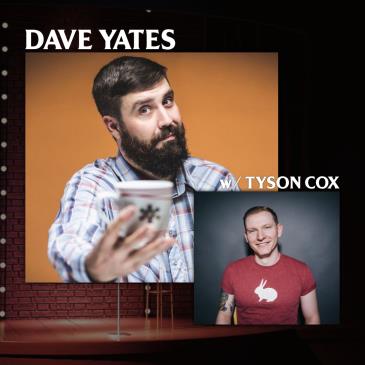