DANNY BROWN (Bio Updated 3.6.15)
The term "artist" is thrown around very freely, but no rapper epitomizes the term better than Daniel Dewan Sewell, A.K.A. Danny Brown. Danny grew up in the decrepit conditions of inner city Detroit. By the time he was a kindergartener, he knew he wanted to be a hip-hop artist. His first recordings were in 2003 as a member of Rese’vor Dogs with fellow Detroit artists Chip$ and Dopehead. His work attracted a Roc-A-Fella A&R who flew Brown out to New York. When nothing materialized, Danny came back to his hometown and started from scratch.
After a series of important, local mixtapes, including the Detroit State Of Mind sequence, Danny released his breakout album The Hybrid in 2010. The album was sad, funny, angry, dark, and down-to-earth, and it led to Danny signing with A-Trak’s Fool’s Gold Records. Fools Gold released the critically acclaimed XXX in 2012. Danny was featured on the cover of The Fader and embarked on the Long.Live.A$AP Tour with partners in crime A$AP Rocky & ScHoolboy Q. XXX solidified Danny as an emerging rap star who could party hard and admit his flaws in the same breath. It was his duality that stood out amongst an overstuffed crowd of new rappers, and it’s that multi-dimensionality that makes his fan base so loyal today.
2013 was a landmark year Danny. He won MTV’s “Best Video” Woodie award for his knockout single “Grown Up”, and went on tour with EDM phenomenon Bauuer. That October, Danny released his third album, Old, to more heaps of praise, as people got to hear Danny broaden his palette with Scottish electronic producer Rustie, Canadian band BadBadNotGood, and electronic darlings Purity Ring. Danny didn’t have to vie for attention with Old—every major music outlet crowned the album one of the best of the year, and Complex.com featured him on one of its vaunted digital covers. To top the year off, Danny added his inimitable style to the interactive video for Bob Dylan’s classic, “Like A Rolling Stone.”
Danny kicked off the next year with a lead appearance in an Adidas’ “Top 10” sneaker ad campaign. He was later featured in a commercial for Google Play that aired during the NBA Playoffs, opened for Eminem at two sold out Wembley Stadium concerts, and rapped alongside fellow Detroit-based MCs Eminem, Royce Da 5'9", Big Sean, and Dej Loaf on “Detroit vs. Everybody” from the Shady Records album SHADY XV.
Danny’s 2015 is looking even better. HBO has featured "Smokin & Drinkin" in the promo for “Silicon Valley,” and Danny wrote and performed the theme song for ABC’s buzzing new show “Fresh Off The Boat.” As Danny writes and records his new album, only one thing is certain: You can still expect the unexpected from the one of the most eclectic musicians working today. 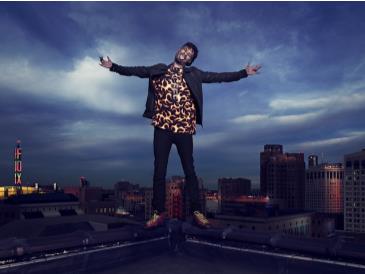