Dan & Shay is an American country duo composed of Dan Smyers and Shay Mooney. The two met in 2012, and released their debut single, “19 You + Me,” the next year. The song was a hit and reached the Billboard Hot 100 chart in 2014, following the release of their debut album, “Where It All Began.” “Where It All Began” reached the top spot on the Billboard Top Country Albums chart and produced two more successful singles, “Show You Off” and “Nothing Like You.” In June of 2016, the duo released their sophomore album, “Obsessed,” The album reached the No. 2 spot on the Billboard Top Country Albums chart. They have also been nominated for several country music awards, and have toured with country superstars Blake Shelton, The Band Perry and Hunter Hayes.

Doors open at 7:00 PM! General Admission, Standing, All Ages. Livewire is an “open floor” venue to allow artists to connect with their audiences during performance.
If you are interested in Bottle Service in a VIP Booth, please visit our VIP Page (http://livewireaz.com/vip).
No service fees for tickets purchased with cash at the Livewire Box Office. Facility fee is charged on all tickets. Prices are subject to change without notice.
Advanced purchase highly recommended as many shows do sell out. 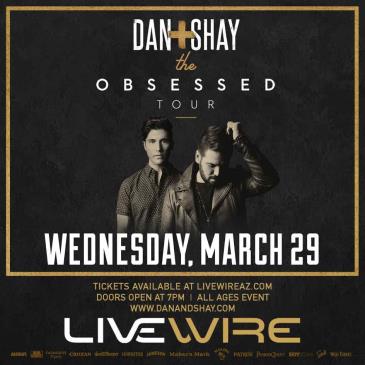