Deaf Club is a savage sound bath dripping with sardonicism: a blastbeat-centric hardcore punk assault channeling crust, thrash, and grind (un)sensibilities. Succinct pauses, surreal frequencies and effects, breakneck pace and sharply hurled vocals characterize the band’s aesthetic, which seems as though it is rooted in a sort of nasty-sound-meets-highbrow-message ethos. Fueled by the onslaught of society’s insanity and driven mad by tinnitus, Justin Pearson (The Locust, Dead Cross, Planet B), Brian Amalfitano (ACxDC), Scott Osment (Weak Flesh), Jason Klein (Run With The Hunted), and Tommy Meehan (The Manx, Chum Out!) approach music as an opportunity to confront our collective sicknesses. Last October, the band released their debut EP, Contemporary Sickness, as well as a Remix cassette EP of bonus remixes featuring GothBoiClique’s YAWNS, Bubblegum Octopus, 304angstroms, and DJ Embryonic Petit Sac. More recently, the band released a cover and video of Killing Joke’s “The Wait” as a benefit, a slew of other music videos including a long form performance of their upcoming LP in its entirety, have worked on collaborations with clothing brand Brain Dead to release ultra limited test pressings of their upcoming album, and have played a handful of shows in Southern California, including under a bridge in DTLA lit by the spotlight of a police helicopter hovering overhead.

Ironically, Deaf Club’s debut LP was recorded on the same day as what would become known colloquially as The Insurrection - January 6th, 2021. While the actions that day at The Capitol were aimless, unplanned, asinine and delusional, this album was created in direct opposition without even knowing it: it is intentional, tactical, bitterly relevant. In short, it serves as a productive disruption to the bootlicking, copsucking, flag-fucking frenzy we’ve found ourselves surrounded by. And although the band’s 2019 EP, Contemporary Sickness, delivered its own blastbeat-fueled urgency in message and tone, this full-length ventures deeper into the abyss. Having had time to stew in the cesspool of the last two years and mutating into its newest variant, Deaf Club confidently emerged angrier, evolved, more focused and thus, more dangerous. It discovers nastier, weirder, grimier territory, often through its use of pedals and distortion, in large part due to the addition of sci fi shredder Tommy Meehan. Alongside Brian Amalfitano, these two guitarists leave no sound untuned. Merge this with Justin Pearson’s always acerbic lyrics alongside drummer Scott Osment and bassist Jason Klein, and what you end up with is Productive Disruption: a death threat to some, a love letter to others. 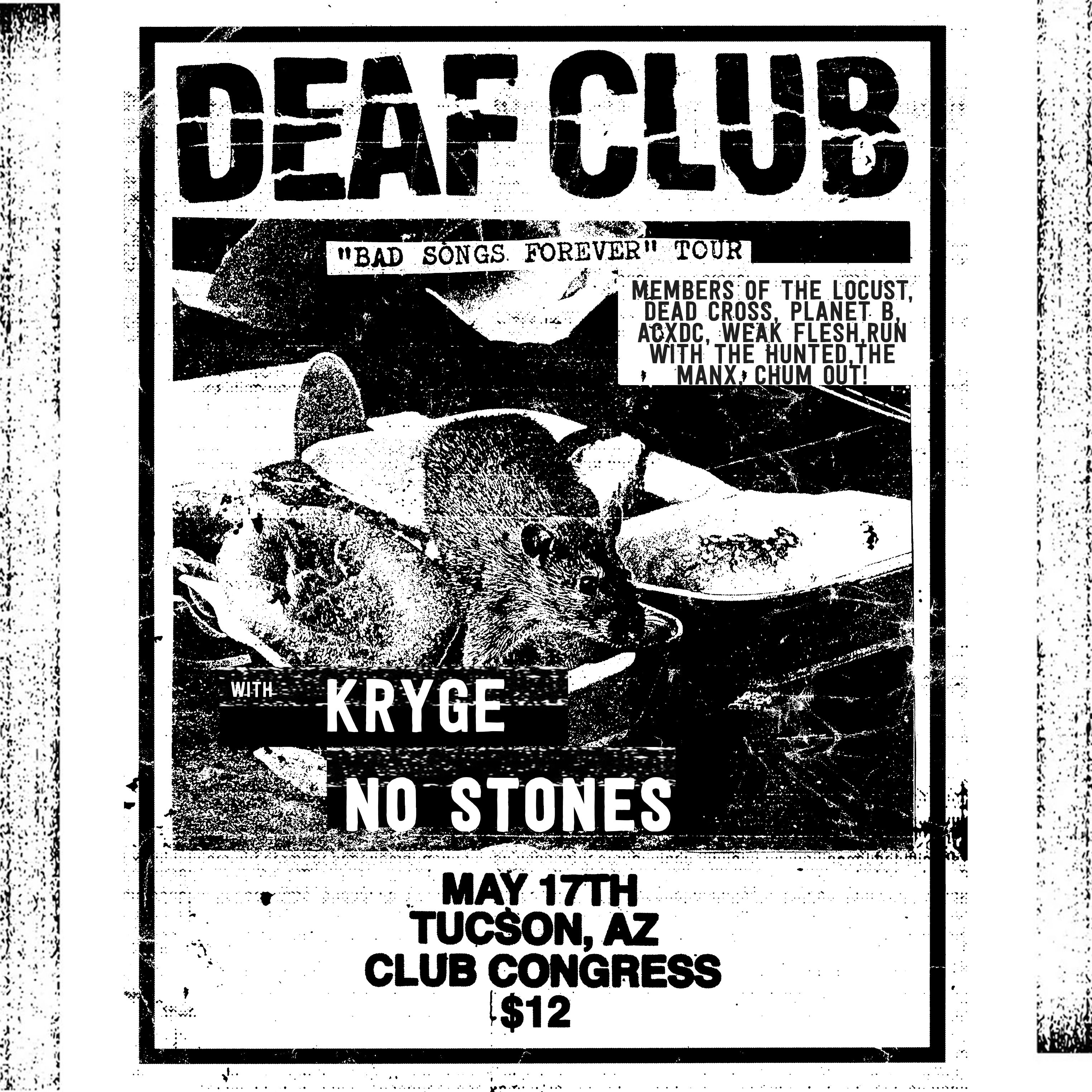