On Saturday June 22nd AVALON Hollywood welcomes in a lineup of bass-loaded dance acts, featuring A-list DJs and back-to-back sets from some of So Cal’s best local talent. Dannic, Andr3x, and DJ Alex cruise through with solo performances while Phynx & Kayla Collins and Ken Ten & Chanimals take over for a night of genre-crossing house fusion.

Dannic hails from the Norwegian town of Berda, the shared hometown of fellow EDM superstars Tiesto and Hardwell. Much like his colleagues, Dannic covers all the bases to deliver both fiery instrumentals and chilled-out deep house mixes. His refined production ability awarded him a spot on DJ Magazine’s Top 100 DJs list for five consecutive years, along with headlining performances at Tomorrowland, Creamfields, Miami Music Week, ULTRA, and EDC.

Andr3x complements Dannic and cranks up the tempo with a mix of big room house, blowing out speakers with hard bass drops and techno-inspired production. AVALON resident DJ Alex offers up more of the same, adding a hardcore twist to his already thunderous dance sets.

Phynx kicks off back-to-back sets with his dreamy take on dubstep and deep house, and Kayla Collins switches things up with hip-hop vocals mixed over chilled-out basslines. Ken Ten takes the stage with an experimental house mix, followed by more deep house vibes from Chanimals. 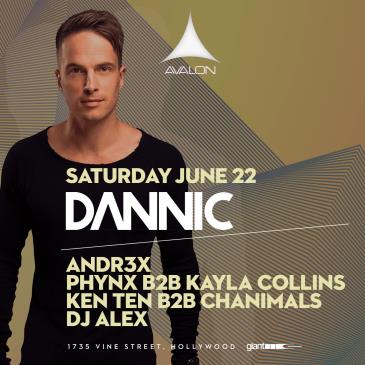