Richie Rich and The Millionaires

Amy Wigton is a dynamic and passionate local singer/songwriter who's playful style blends Blues, Soul, Rock, Americana, and Folk, Amy performs an eclectic collection of originals, fresh covers as well as songs from her “Mostly Joni” show that features the beloved songs by Joni Mitchell. She has shared the stage with such artists as Grammy Award Winner Marc Cohn, Jefferson Starship, Norton Buffalo, Loudon Wainwright III, Dave Mason, Jesse Colin Young, The Waybacks, Ramblin’ Jack Elliott. Most recently she was a member of the King/James band that featured the songs of Carole King & James Taylor.

Richie Rich and The Millionaires:

Rich Galagaran is the founder of Richie Rich and The Millionaires. Rich is a Bay area musician, singer, and songwriter, employing an acoustic-based, soft ballad rock style similar to the Beatles, John Mayer, John Prine, and Elvis Costello, to name several. The band blends originals penned by Rich with a selection of the '70s, '80.s and '90s covers that employ understated guitar, and crisp harmonies. Rich is joined by Rod Witel, an accomplished guitarist, pianist, and songwriter, Jonathan Bassil, professional bass player, songwriter, and veteran of many local bands, and Michael Arrow, longtime percussionist and a local favorite. 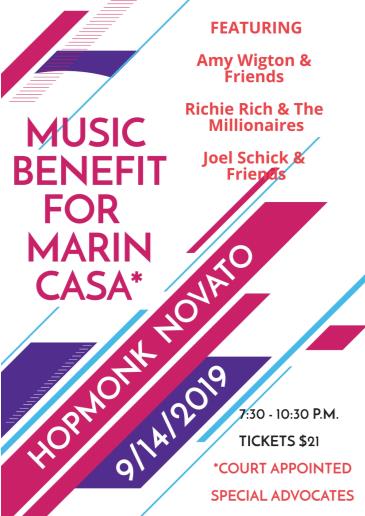