So says Dallas Green, otherwise known as City and Colour. He’s not really talking about confessionals (though that might happen, too) but truthfully incarnated music: organic songwriting, natural process and sincere moments captured in the studio. Captured—not manipulated. For his fourth LP, The Hurry and The Harm, Green not only wanted to present an honest album, but an honest version of himself. To do so, he had to leave some things behind, confront others and let the rest simmer.

Green wasn’t quite prepared to make another album so soon. On tour to support his last album, Little Hell (2011), he couldn’t quite shake the feeling that something was unbalanced, uneasy. “I was being pulled in two different directions,” Green recalls. He was mentally near the end of the road with his former band ,Alexisonfire, but couldn’t yet share the news with his fans. “I wanted to be in one place, but I didn’t want to let my friends down.” He started reading poetry—specifically the Kentucky-born author Wendell Berry, and his work “The Peace of Wild Things.” “I come into the peace of wild things, who do not tax their lives with forethought of grief. I come into the presence of still water,” it goes. Those lines made Green “excited about words again,” and comforted him in a time when things didn’t seem too peaceful. The songs came—quickly, even.

It’s no surprise, really. City and Colour’s music is exactly that: peace, in wild things. There’s a calm, dulcet tone to the songs, the melodies crafted to provide restlessness amidst a sonically complex journey that both soothes and rustles. The record’s first leaked track, “Of Space and Time,” showcases Green’s voice as it dangles in his own special kind of falsetto, set to a chugging drumbeat and subtle strum. “I’m roaming through the hills all alone,” he sings. “I’m trying to find my direction home.” Maybe he didn’t know it at the time, but home is City and Colour—it’s not simply a “solo” project from an otherwise accounted-for band member, but is Green, his primary entity, and his honesty.

The Hurry and The Harm is the first City and Colour album recorded outside of Canada—Green took his process this time to Nashville, Tennessee’s Blackbird Studios. “I’ve never gone anywhere else to make a record,” Green recalls. “I think it worked out, and it was a wonderful experience.” He recruited an excellent team of players to round out the songs, including Jack Lawrence on bass (The Raconteurs, The Dead Weather), Bo Kosteron keys (My Morning Jacket), Spencer Cullum (Caitlin Rose) on pedal steel and both Matt Chamberlain (Pearl Jam, Fiona Apple) and James Gadson (Bill Withers, BB King) on drums. Green once again found great kinship in producer Alex Newport, who has worked with such varied and dynamic artists as At The Drive-In, Death Cab for Cutie, Bloc Party and The Mars Votla (and more notably with Green on Little Hell).

The resulting album is a journey through a state of mind, exploring everything from Green’s struggles to leave his previous band (“Of Space and Time”) to his distaste for gossip media (“Commentators”).Musically, the artful evolution can be felt in the crushing, sweeping rush of the first single, “Thirst,” with its aggressive vamp and both acid instrumentals and tongue: “after I’m gone / once I finally leave / you will be left alone to the wolves and the thieves.” There is a longing in the words bu ta certain direction in the songs, such as on “Two Coins” which balances a quiet folkiness with an unexpected guitar solo, searching through the play in his voice and the introspection of the ironically upbeat strums of “Harder Than Stone.” “Lyrically, now that I look back at the record as a whole, there are a lot of songs that deal with me searching for something,” he says. “And I know now that I wrote those songs near the end of Alexisonfire.”

Green began recording as City and Colour in 2005, with Sometimes, followed by 2008’s Bring Me Your Love and 2011’s Little Hell and has experienced huge success both on the charts and the road. All three previous studio albums have achieved platinum status in Canada, while Little Hell is also now Gold in Australia. Additionally, Little Hell debuted at #1 on Canada’s Top 200 Chart, #28 in the U.S., #2 in Australia and top 40 in the U.K. Moreover, almost every show in 2011 and 2012 sold out (including the famed Royal Albert Hall, a two night stay at the Roundhouse in London and New York’s Terminal 5). In support of The Hurry and The Harm, City and Colour will once again embark on a wide-ranging set of dates across North American and the world. The tour will feature a brand new touring band including Jack Lawrence (The Raconteurs, Dead Weather) on bass, Dante Schwebel (Hacienda, Dan Auerbach) on guitar, Doug MacGregor (Constantines) on drums and Matt Kelly on pedal steel guitar and keys.

Playing guitar since age eight and crafting songs since his teenage years, Green has always known he wanted to write music and sing: mostly for himself, to find peace and clarity amongst the chaos. He thinks it’s kismet that others happen to like to listen. “At the end of the day, when I write a song, it has to make me happy,” he says. “I have to want to sing it again. And then the hope after that is that somebody else will like it.”

And they do, because it’s the peace of wild things. 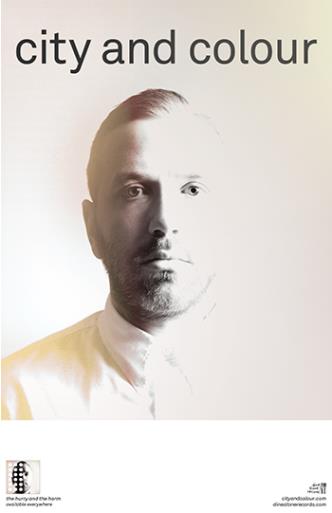