Canadian duo, Chromeo (Website | Facebook), is composed of Patrick Gemayel (P-Thugg) and Dave Macklovitch. The duo met in the mid-1990s and officially formed Chromeo in 2002. Their debut album, She's in Control, was released in 2004 by Vice Records and their single, “Needy Girl,” became a worldwide hit.

After a three year hiatus, Chromeo released a second album, Fancy Footwork in 2007. In 2010, they released their third studio album titled Business Casual and it peaked at #4 on the Billboard Dance/Electronic Albums chart and #70 on the Billboard 200 Albums chart. The music video for their hit, "Night by Night," off the Business Casual album, has received over 4 million views on YouTube.

Chromeo has appeared on KCRW's Morning Becomes Eclectic, was featured on the cover of Future Magazine, and sold out The Forum in London. Their latest album titled White Women was released in 2014. 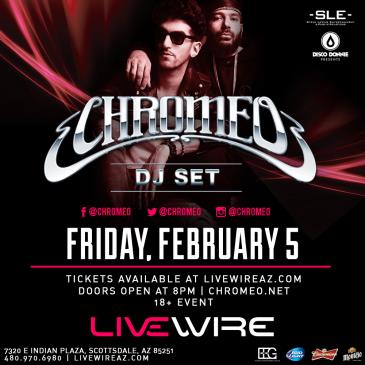