Having distilled his own signature sound of blues and folk for over 50 years, Chris Smither is truly an American original. A profound songwriter, Chris continues to draw deeply from the blues, American folk music, modern poets and philosophers. From his early days as the New Orleans transplant in the Boston folk scene, through his wilderness years, to his reemergence in the 1990s as one of America’s most distinctive acoustic performers, Chris Smither continues to hone his distinctive sound. He has always traveled his own road and stayed true to his musical vision. He may be best known for writing "Love You Like A Man" which Bonnie Raitt and, more recently, jazz great Diana Krall have covered. His music has been covered by numerous artists and featured in soundtrack albums, independent film, television, and commercials. Reviewers continue to praise his dazzling guitar work, gravelly voice and songwriting. The New York Times: “With a weary, well-traveled voice and a serenely intricate finger-picking style, Mr. Smither turns the blues into songs that accept hard-won lessons and try to make peace with fate.”

More From the Levee (2020 Signature Sounds) is a masterwork and companion release to the celebrated double-CD 50-year career retrospective Still On the Levee that came out in 2014. It sports the unmistakable guitar sound Chris has made his own meshed with spare, brilliant songs, delivered in a bone-wise, hard-won voice.

ASSOCIATED PRESS: Smither is an American original, a product of the musical melting pot, and one of the absolute best singer-songwriters in the world.

ROLLING STONE: Bathed in the flickering glow of passing headlights and neon bar signs, Smither's roots are as blue as they come. There is plenty of misty Louisiana and Lightnin' Hopkins in Smither's weathered singing and unhurried picking. So fine.

NEW YORK TIMES: With a weary, well-traveled voice and a serenely intricate finger-picking style, Mr. Smither turns the blues into songs that accept hard-won lessons and try to make peace with fate.

A songwriter’s songwriter,known for his lyric craft, distinctive voice and soulful songs steeped inclassic rhythm & blues, pop, jazz, folk and country, Milton first gainednotoriety in his hometown New York City when his song “In The City” became ahit on New York’s WFUV radio. His live performances, which include materialfrom every one of his albums, are praised for their wit, humor, and captivatingcharm.

Milton has toured extensively throughout the states since 2005,as a headliner and appearing as support for his hero and mentor Chris Smither,in addition to shows and tours with Joan Osborne, Steave Earle, Dave Alvin& Jimmie Dale Gilmore,  Sonny Landreth, Colin Hay, Kat Edmonson, JoshRitter and many more.

In late 2019, Milton premiered his 5th and finest album StudioCity with a sold out show at City Vineyard NYC.  The album, a veritabletour de force of songwriting and studio craft, features 12 ultra-catchy,concise tunes ranging in style from Sinatra-esque full orchestra swing, to Sgt.Pepper-like whimsical comedy to vintage country and New Orleans rhythm and blues. In concert, Milton and his ultra-sharp band of NYC veteran sessionplayers deliver the songs seamlessly with Milton’s own graceful livearrangements 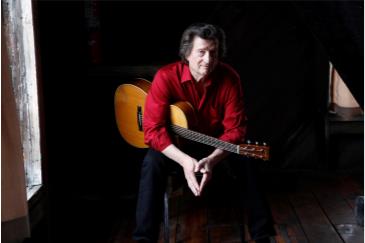