Processing...
Tickets
Online ticket sales are now closed, but tickets will be available at the door. Doors open at 9pm, arrive early.

Our amazing event series at The Nightclub at Ameristar will be welcoming the one and only Chris Lake on Saturday, November 30th. This definitely an event you won't want to miss. Opening DJs are TBD.

Over the past six years, English producer and DJ Chris Lake has traveled the globe indulging his audience in the deeper throngs of electronic music. With crossover hits such as ‘Changes’, ‘La Tromba’, ‘Only One’, ‘Sundown’ and ‘If You Knew’ as well as presence in the darker and deeper side of electronic music, Chris has become known as a ‘champion of creative freedom’.

Signed to a worldwide deal with NY-based imprint Ultra Records, his most recent releases include ‘Black Thong’, (a collaboration with producer Michael Woods), and other single ‘Ohh Shhh.’ A career which is split in two with a major focus for Chris as the head honcho for his label, Rising Music.
Rising has become an avenue to grow and support young and talented artists, and Lake has proved his A&R skills by signing talents such as Nom de Strip and TJR.

Doors open at 9pm and the party goes until 3am
Must be 21+
For more information and questions, please contact kerry@partystarevents.com 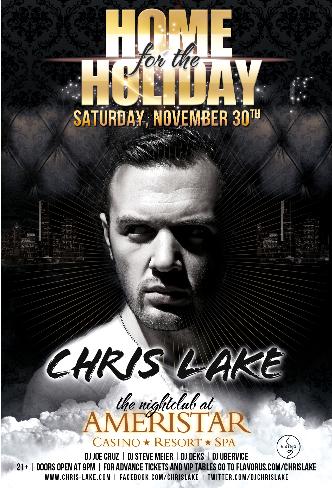