For the past 20 years, Chris Knight has only made music his own way. He’s released eight acclaimed albums, played thousands of electrifying live shows and built generations of fervent fans from Texas honky-tonks to Manhattan rock clubs. He’s been hailed as “the last of a dying breed...a taciturn loner with an acoustic guitar and a college degree” (The New York Times) and “a storyteller in the best traditions of Mellencamp and Springsteen” (USA Today). Bottom line, he’s hard-earned his reputation as one of America’s most uncompromising and respected singer/songwriters. And now with his new album Almost Daylight, Knight delivers the most powerful – and unexpected – music of his career.

A near-lifelong songwriter who names Merle Haggard, Guy Clark, and Willie Nelson among his main inspirations, Jason Eady grew up in Jackson and got his start performing in local bars at age 14, showing his natural grasp of everything from soul and R&B to blues and country. After independently releasing his debut album From Underneath the Old in 2005, he expanded his touring radius and continued turning out critically praised work, including 2012’s AM Country Heaven (a top 40 debut on the Billboard Top Country Albums chart), 2014’s Daylight/Dark (an album that “belongs on a shelf next to Dwight Yoakam’s Buenos Noches from a Lonely Room, Joe Ely’s Letter to Laredo, and yes, even Willie Nelson’s Phases and Stages,” according to AllMusic), and his self-titled 2017 effort (hailed by Rolling Stone as “[h]eavily steeped in his storyteller lyrical style and cleverly framed by uncluttered, acoustic-rich arrangements”). Through the years, Eady has also made his name as an unforgettable live performer, sharing stages with the likes of Sturgill Simpson, Band of Heathens, and Reckless Kelly.

For details about our event protocol and logistics, please visit: https://www.covesatsml.com/live-events-faq.html 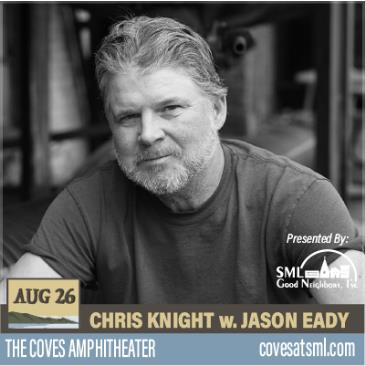