Bio:  because the internet is Childish Gambino’s follow up to his Glassnote Records debut album CAMP which was released in 2011. Childish Gambino emerged as one of the most exciting young talents in music, landing at #11 on the Billboard Top 200 Chart and #2 on the Billboard Hip-Hop charts, CAMP has received critical acclaim from publications such as The Source, XXL, Entertainment Weekly, Rolling Stone, NPR and more. Childish Gambino, with his unique blend of hip-hop genres and lyrical genius, has gone from a viral cult following to a mega sensation. The New Yorker praises, “With a vocal attack reminiscent of Pharcyde’s Bootie Brown, Glover delivers rapid-fire stream-of-consciousness one-liners, along with in-depth and intelligent assessments of the recording industry, fame, and fortune.” 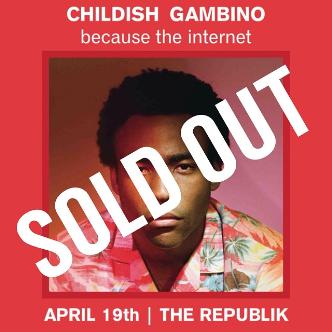