Cheat Codes isn’t just the musical union of Trevor Dahl, Matthew Russell, and Kevin Ford, it’s also a mantra. The members of the electronic dance music outfit may have arguably figured out the secret to life—or at least a way to jump right to the good part...
“The ‘Cheat Code to Life’ is being able to have fun, while skipping all of the hard stuff and any sorts of limitations,’” explains Matthew “It’s our mission statement. The whole idea and vision for us
was to start a project that was really entertaining and fun. We
decided if we made simple quality songs, it would work out organically”. “We all believe in the ‘Law of Attraction’” Trevor elaborates. “If you focus only on what you want to do, you can bring it to life, leaping over all of the difficulties.” That focus continues to yield incredible results for the Los Angeles-
based trio. The three friends decided to start making music in 2014. Their first independent single, 2015’s “Adventure,”clinched #1 on Spotify’s Global Viral 50 and earned over 5 million-plus
plays in a year. Shortly after, the boys hit the road with The Chainsmokers, Ansolo, and DallasK on a sold out U.S. tour, garnering support from the likes of Diplo, Like Mike & Dimitri Vegas, and more.
Along the way, they received props and coverage from BuzzFeed,
Huffington Post, Indie Shuffle, EDM Sauce, and many others.
Everything set the stage for the explosion of their next smash “Sex” with Kriss Kross Amsterdam. Within two months of its release, the song vaulted to #10 on Spotify’s Global Charts, went Top 20 in 20 countries, and racked up 100 million-plus streams and 10-
million YouTube views and counting. Taking the hook from Salt-N-Pepa’s timeless nineties jam “Let’s Talk About Sex” and
bumping and grinding it against a tropical-inspired house soundscape dripping with cheeky club energy, “Sex” immediately seduces anyone in earshot. “We were just writing together one night,” recalls Trevor. “Matt started humming the chorus. Within an hour, we had the first verse. It was recorded at our home studio, and we just wanted to do our own thing. It felt right!” “That’s the way it goes for everything,” adds Kevin. “When it came time to make a visual, we didn’t want to do something typical either. We wanted to shoot something funny and unique with the Sex Ed class.”
“Who knows if we’d ever get the chance to do that again,” grins Matthew. Cheat Codes continue to prove their philosophy right, and “Sex” is just the beginning. “At the end of the day, we just want to write good music,” concludes Trevor. “It can be crazy. It can be sad. It can be happy. It’s just got to reflect who we are.” “When people hear us, I want them to feel like they can enjoy life and have
a good time,” Matthew leaves off. “Life is meant to be easy. We’re proof. You can create whatever vision you have. It can be as crazy as, ‘I want to make songs about sex and turn it into a job!’ You can literally do anything.” 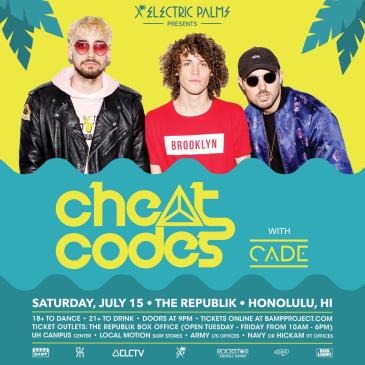