Over the past decade, Israeli producer Guy J has established himself as one of the most emotive and sensual artists on today’s electronic music roster, as well as a trailblazer of the Israeli house and techno movement. His innate ability to blend airy synth with layers of progressive house and techno cuts constantly leaves his audience wanting more. Guy J has graced stages around the world, performing at highly sought-after events such as Warung Day, WE ARE LOST, Tomorrowland and more, so expect a performance of epic proportions as he brings his skills to AVALON in partnership with Catalyst Events.

Guy J will be joined by the deep, dark, versatile sounds of Dosem. Dosem’s career has been on a constant upward trajectory since 2008 and he spent much of last year honing his Houstrike brand, the multimedia lab where he explores the deeper shades of house and techno. He’s been steadily delivering new music to renowned labels such as Anjunadeep, Toolroom, and Stereo Productions which has garnered him unwavering support from the underground elite, and he’s sure to prove that passion and limitless potential on our decks in Hollywood on August 3rd. 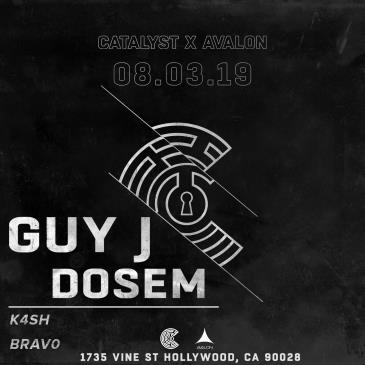