Cashmere Cat is the production alias of young Norwegian producer Magnus August Høiberg – who has caught one to watch buzz early this year from the single ‘With Me’ premiered with Zane Lowe on BBC Radio One & video premiere at Rolling Stone – not to mention 30+ international headline dates including a packed out SXSW, MMW & Music Hall of Williamsburg, In February Cat appeared feature on the Ludacris single “Party Girls” alongside Jeremih & Wiz Khalifa, which allowed him to star in his first Hype Williams directed video. What a crazy life; this unprecedented mention for a producer signals a sea change happening in popular music & the role of our ‘underground’ producers as acknowledged artists in their own right. A world in which Cashmere Cat effortlessly embodies his own underground influences of glittering RnB, French Electro & 00’s club Hip . On Wedding Bells – his debut vinyl EP – he is truly free, non beholden to conventional pop arrangement we find Cat in abundant celebration with a range of highly syncopated pentatonic workouts. Four songs built in equal parts from glittering RnB, French Electro & 00’s club Hip Hop – this is wide, cinematic and unabashedly bright new dance music. Rarely does a new artist emerge with such a unique voice across their work – Cashmere Cat is unconcerned with where he fits with DJs and his music is smarter for it.

The Wedding Bells EP represents the next stage for Cashmere Cat as recording artist and has commanded support so far from: Kode 9, Éclair Fifi, Nguzunguzu, Hud Mo, Rustie, Baauer, Diplo, Skrillex, A Trak, Brodinski – as well as BBC Radio One & Triple J. 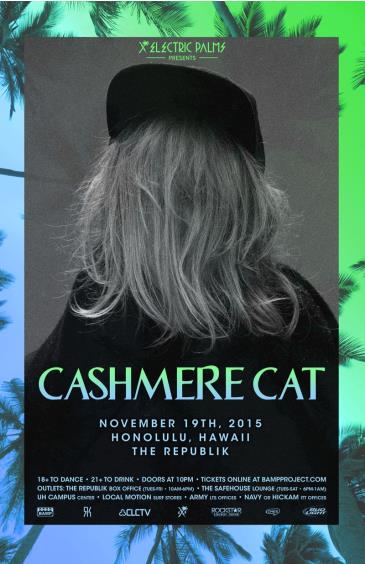