Cash Cash which consists of best friends and brothers, Jean Paul Makhlouf, Alex Makhlouf and Samuel Frisch first made their way into the hearts of core dance music enthusiasts with their vibrant remixes for the likes of Nicky Romero (“Symphonica”), Capital Cities (“Safe And Sound”), Vicetone (“Heartbeat” ft. Collin McLoughlin).

But the trio truly impresses with their originally produced material, including Krewella’s single, “Live For the Night,” coming just before their first official Big Beat release, “Take Me Home” ft. Bebe Rexha which smashed the charts.

Cash Cash’s fusion of captivating pop vocals and signature banging electro‐house beats have already captivated dance music insiders and tastemakers like elektro magazine, Complex’s Do Androids Dance and Dancing Astronaut, who named the group one of their “five breakthrough artists for summer 2013.” and continue to grow exponentially in 2014. Expect to hear more praise for this crowd‐pleasing act from EDM and pop music fans and writers alike. 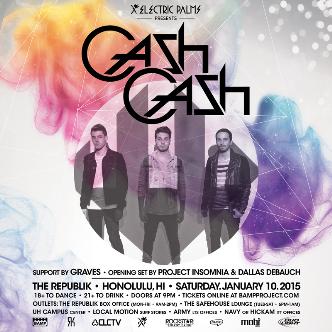