Capri Everitt is a 17 year old Guinness World Record-holding singer. She received world-wide recognition in the international media during her journey “Around the World in 80 Anthems” where she sang 80 anthems in 80 countries in their native languages to raise money and awareness for orphaned and abandoned children through SOS Children’s Villages. Capri's hit song "Not Your Toy" has almost a million views on Youtube and her original song, “Y” has over 1,000,000 streams on Spotify. Her award-winning single “Girl Stand Up” resulted in an invitation to perform at Amateur Night at the Apollo in New York in February 2020 as well as a spot in the Top 10 Songs for CBC’s 2020 Searchlight Contest.
Capri can be found on the following platforms:

Singer/songwriter/artist Ashlynn Malia provides a portal to her inner world through her deeply honest storytelling in the music she creates. She uses songwriting as a way to understand herself and hold a mirror to the subtle inner workings of her mind.

Raised in Los Angeles, Malia was introduced to the entertainment industry at a young age and toured the country for an internationally known kids music group at the age of 12. Before then, she had spent most of her childhood surrounded by musicians, learning to sing and play instruments at her family’s music school. Since then she’s worked as a professional dancer, in music videos for artists such as Justin Bieber and Taylor Swift, and has been finding her own voice as an artist herself.

Her debut EP, rather be alone, was released in June 2021. It includes singles such as “desperate" — which can be heard in an episode of The Stand on CBS as well as multiple dance films and movement visuals — “open,” an introspective, cinematic song about the fear of being vulnerable with others and the consequences it may bring, and “Emergency,” a track about wanting but not needing people and being able to prioritize her own peace when it comes to relationships. All of the songs on the EP center around Malia’s personal experiences with social anxiety and human connection of all kinds. “If making those connections means enduring all the overthinking, insecurity, growing pains, abandonment, rejection, questioning of my own self-worth and blurring of my mental vision - then I'd rather be alone where I'm safe from that type of pain”

Malia first started writing the songs for rather be alone at age sixteen, and met her producers Andrew Weitz and Koby Berman a year later, starting the production process that would span over the next two years. She recounts the time spent making the EP, saying  “I think we all genuinely enjoyed working together and finding our collective sound. Looking back at the start of this project, we’ve all evolved so much since. We poured our time, energy, hearts, and souls into this body of work and it's extremely personal and special.”

Aibai is an indie/electronic producer from Minneapolis. She is accompanied by Colby (co producer/vocalist) and Marie (drummer). Their music will make you dance with house style beats, ethereal vocals, and catchy guitar riffs.
Spotify:
https://open.spotify.com/artist/4UrpSrYhDXfRdLKMRsl1zF?si=a0pmNMwmQrWS-CuJ6AgErA
Instagram:
Aibai :https://www.instagram.com/aibaitarrant/?hl=en

Andrew Rudy is your favorite bottle blonde, LA based, over the top, dramatic artist. He is known for his incredible vocals and large range. Currently studying music in USC, Andrew has big plans in store for you all so get ready!
When you mix powerhouse vocals with catchy pop hooks, and add a dash of divine and dramatic concepts you get Andrew Rudy’s music. From being Possessed to being Gold Blooded, Andrew’s music tackles more than just the concept of love and heartbreak, there is a full spectrum of human emotion that Andrew is here to shine a light on in the most avant garde way. Andrew strives to show the experiences of the LGBTQIA community. Andrew’s music is here to make an impact. Whether that be social anxiety in confessing your feelings to another person in his record Do U Like Me or whether it be about encouraging someone to come out of the closet and live their best life in Gotta Get Out or perhaps a strong feelings towards a long distance lover in German Lover, Andrew’s music is here to make an impact. Comments from Andrew’s fans about his music include “...such a unique perspective that today’s music is sorely lacking” Andrew Rudy was born in Los Angeles, California and has been able to play in many iconic LA venues! Andrew’s influences include: Melanie Martinez, Demi Lovato, MARINA, Panic! At The Disco, Lady Gaga, Doja Cat and Nicki Minaj. 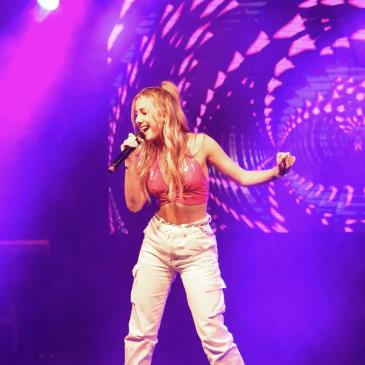