Santa Barbara native Candyland began producing her own original songs back in April of 2012. After becoming the first act to win back-to-back Beatport remix contests (Skrillex “Make it Bun Dem” & Bingo Players “Rattle”) and racking up over 1.3 Million Soundcloud plays, she released her debut album “Bring the Rain” on SPINNIN RECORDS (Jan 21st 2013) which charted: #3 on the Beatport Overall Top 100, #1 on Dubstep Top 100, #1 on Electro House Top 100, #1 on Drum N Bass Top 100, as well as #1 on the Glitch Hop Top 100. Candyland continues to pave their own lane bridging the gap between trap, dubstep, and house music with every original/remix they release.

Felix Cartal is from Vancouver, CA; not the most usual place for a dynamic mastermind of electronic music.

Felix has made a name for himself remixing the likes of MSTRKFRT, MOVING UNITS, ACID KIDS. He has done some especially unique remixes for non-electronic bands, FROM MONUMENT TO MASSES and DRAGONETTE, and some uber buzzworthy bootlegs of BRITNEY SPEARS and ASHLEE SIMPSON tracks.

Felix has toured with MSTRKFRT, LA RIOTS, and many more artists, in addition to playing shows with STEVE AOKI. 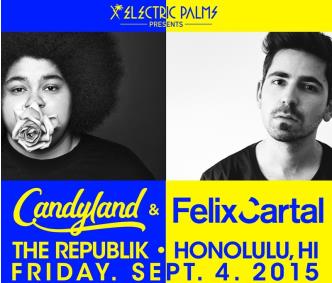