Tuesday, February 23rd, help us raise awareness for the Chris Paul Family Foundation with the Clippers' own Chris Paul! Starting at 6pm, red carpet & pre-show activities will start as VIP ticket holders are ushered in for an exclusive meet & greet with Chris Paul himself, including delicious gastropub cuisine from our Chef, an open bar in our private LUXE suite, premium seating, and a signed pin from Chris Paul.

Afterwards, join us on the lanes as Chris Paul and his celebrity guests bowl it out with some fierce competition! ESPN will be filming live as the bowlers duke it out on the lanes, with an exclusive PBA television release set for early 2016.

In an interview about the 2012 Celebrity Bowling Invitational, Chris Paul had this to say:
“The Chris Paul PBA Celebrity Invitational (presented by Sheets™ Brand) is a focal point and one of the highlights of the year for the CP3 Foundation,” said Paul. “We’d like to thank the PBA, Lucky Strike LA Live, ESPN, event sponsors Sheets™ Brand and Storm Bowling Products, and all the participants for making what is becoming an annual tradition for the CP3 Foundation and its charities. It’ll be a lot of fun and I expect to defend my title.”

Among the PBA stars scheduled to compete in theCelebrity Invitational are:

The PBA players and celebrities will compete ina doubles format with teams made up of one celebrity and one Tour player. Thenight’s action will also feature a “Celebrity Clash” best-ball eliminationevent where the celebrity who gets the lowest pinfall in each frame iseliminated until there is a winner.

The Chris Paul Family Foundation strives to positively impact individuals and families by leveling the playing field in Education, Sports and Life. The foundation provides resources that enrich and strengthen healthy development of strong communities.

In 2005, Chris and his family established the CP3 Foundation, a philanthropic partnership with The Winston-Salem Foundation in honor of his late grandfather. The foundation was created to highlight Chris’ dedication and love, both to his grandfather’s spirit and to the city of Winston-Salem, NC, for nurturing him from his days as a stand-out high school student-athlete to a national star at Wake Forest University.

Celebrating 10 years of service to the community, Chris Paul and his family are extremely proud of their endowment to Wake Forest University. Annually awarding two scholarships (one athletic and one academic) to a Forsyth County, North Carolina student with the Nathaniel Jones Scholarship, in memory of Chris’ grandfather and mentor.

The foundation’s efforts are truly a family affair and with its 10-year anniversary, the foundation officially changed its name to the Chris Paul Family Foundation to include the involvement of Chris’ parents, wife, brother, sister-in-law and extended family members.

The foundation’s emphasis on community involvement has won them the NBA’s Community Assist Award three times in Chris’ 10-year career. The award is given to an NBA player that consistently shows passion for philanthropy and community service.

Recognized as a leader in the area of philanthropy, The Chris Paul Family Foundation will continue to use its platform to impact communities nationally and globally. 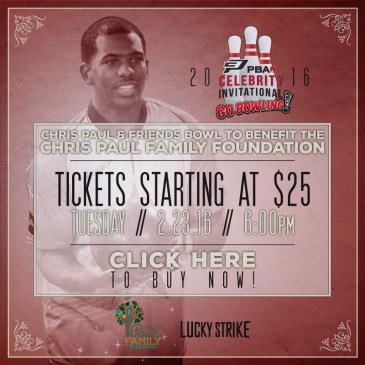