CONTAINMENT BREACH presented by The Crypt and Satyr Ent

Presented by The Crypt and Satyr Ent.

Wyatt Marshall has risen as one of North American rave’s most exciting new talents, known for a keen understanding of the electronic music landscape and a scene leading approach to modern house and techno.

After years building his reputation as a talent to watch around the industry, Wyatt has stepped into a sound all his own, helping to define the next generation of deeper, analog-minded American producers. This path has not gone unnoticed, yielding him marquee releases on Audiojacks’ Gruuv, Stefano Nofereni’s Deeperfect, Sanity, Whoyostro, Desert Hearts, Percomaniacs, Observatory Music and many more. His discography tells the story of an upstream commitment to never settling for the trends of the moment, always letting quality and eclecticism guide the way.

2021 sees Wyatt pushing forward, turning a cheek to club closures with long productive hours in the studio. In what is being revered as a breakout release, he makes his DoNotSleep debut with a three track EP on the Ibiza mainstay imprint. This follows an already busy year on the calendar with EPs on Rendr and Whoyostro respectively.

On the road’s past Wyatt has landed on key stages including SPACE Miami, LA’s SOUND Nightclub and Academy, Chicago’s Spybar, Desert Hearts Festival, Shady Park Tempe, SF’s The Midway, Bang Bang San Diego and many others.

For Wyatt though, it all starts in the studio, surrounded by the electronics that have filled his days into nights over the past decade. His passion for production is what brought him here and will continue to lift him as a guiding light for the North American scene and a name to watch in the global underground. 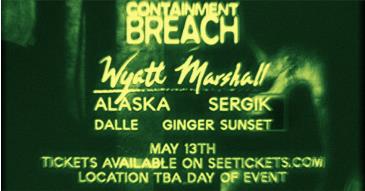