Doors open at 6:00pm.  Reception includes complimentary food and beverages from 6:00pm to 7:15pm in the DGA Lobby.

Film begins at 7:30 pm in both Renoir & Truffaut Theatres.

The Renoir Theatre showing will be followed by a Q&A with director Ladj Ly and actor Djebril Didier Zonga.

Victor Hugo’s magnum opus is both lionized and shaken up in Ladj Ly’s sprawling fresco of his native Montfermeil — a collection of housing projects crawling with sleazy cops, small-time hoods, the Muslim Brotherhood, and a ragtag group of kids left to fend for themselves… all jockeying for turf and struggling to forestall the inevitable. Majestic, stirring, gripping and compassionate, with a musical score that is, at once, moving and thrilling, the film follows an upright cop on his first day on the job, as he learns the ropes and struggles to hold onto his principles. It opens with a rousing rendition of La Marseillaise and a joyous eruption of fraternité, and concludes with a resounding eleventh-hour alarm and powerful plea to diffuse the tinderbox and somehow resolve all this (justified) anger and violence. Because the revolution is ever at hand!

Co-writer/director Ladj Ly grew up in the Les Bosquets neighborhood of Montfermeil. Passionate about the moving image from a young age, he began making short films at the local Kourtrajmé Collective and surreptitiously documenting violent arrests by the police on video. He inadvertently became the poster-boy for the momentous 2005 riots that erupted in those outer-city projects, thanks to artist JR’s photo mural famously depicting Ly brandishing a movie camera like a machine gun, which became the backdrop for much of the press coverage of those incendiary protests. He went on to direct several shorts and documentaries. His 2016 doc À voix haute : La Force de la parole was nominated for a César Award, as was his 2017 short, Les Miserables, which became the blueprint for this film. In 2018, he founded the École Kourtrajmé, a free film school in Montfermeil. Les Misérables, which Ly co-wrote with Alexis Manenti and Giordano Gederlini, and was honored with the Jury Prize at Cannes this year, is his first narrative feature. 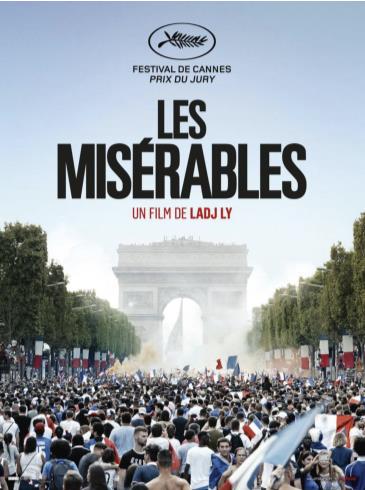 Show Map
View 7920 Sunset Blvd. in a larger map
We use cookies to provide you with the best experience possible. By using See Tickets, you accept our cookie policy.
Accept
ftr1:0