When singer-songwriter Dylan Baldi began recording hyper-catchy and often deliriously distorted guitar-pop songs on a computer in his parents’ Cleveland basement, he was doing it alone—juggling every instrument and singing undefinable lyrics that used obtuse abstractions as much as they did teenage diary. The young, once-tuxedoed concert saxophonist started releasing a flurry of lo-fi earworms across 7” singles, cassette splits, benefit compilations, and one album, Turning On. Released by Carpark in 2010, the album was reissued on vinyl in 2020 for its 10-year anniversary.

The band is currently comprised of Baldi on guitar, vocals, and songwriting duties; bassist TJ Duke; guitarist Chris Brown; and drummer Gerycz. Each is an accomplished musician with a slew of other musical endeavors to their name. Some of these projects exist in the same guitar-pop realm as their main band, while other projects veer into avant, grotesque, and otherworldly zones fit for only the most fried and open ears. Through consistent touring and a steadfast dedication to growing as friends and collaborators, the four-piece has perfected a heavy, aural-assault style and merged it with Baldi’s ridiculous pop genius. This amalgamation is beautifully evident on The Shadow I Remember.

For their fifth studio full-length as a band (and ninth album under the project name), they reconvened with legendary producer and engineer Steve Albini, who helmed the sessions for the breakthrough Attack on Memory. “He has a gift,” Baldi says. “He naturally makes it sound right. Albini’s work is a presentation of the band as they are. No affectation.” On The Shadow I Remember, the producer captures the band at its strongest. Though the lyrics concern the debilitating despair of everyday life, the band can be heard joyously playing unabashed, volume-driven, ear-drum-crushers that masterfully highlight Baldi’s astonishing songcraft. http://www.cloudnothings.com/


6 ticket limit per customer/account/household/email/credit card/address. Orders exceeding the 6 ticket limit subject to cancellation. Orders place for the sole purpose of resale will be cancelled. 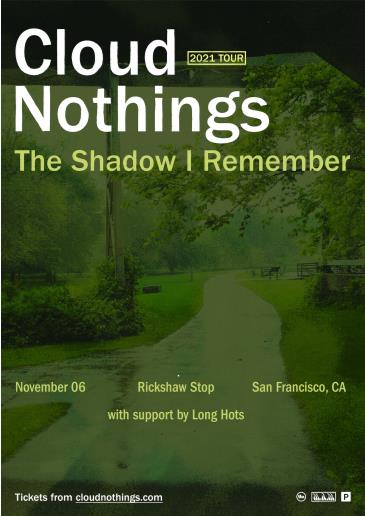