At the top of 2020, after a year of traversing the globe in support of 2019’s Run Fast Sleep Naked, Nick Murphy began creating music that simply felt good. Though the singer had retired his billion-streaming Chet Faker project four years prior, the new songs he was working on in his New York City studio had an energy reminiscent of his earlier work. Reviving the project “wasn’t on my radar” at the time, Murphy admits, but the next thing he knew, he had a full album.

The result is Hotel Surrender, a radiant 10-track LP full of swaggering bass lines and electrifying melodies that reintroduces Chet Faker to the world – and to Murphy himself. Like his debut LP, 2014’s Built on Glass, Murphy wrote and produced Hotel Surrender solely on his own, finishing most of the songs before COVID-19 hit in March 2020. Just after the pandemic caused a worldwide shutdown, Murphy lost his father, and suddenly the new feel-good music took on an even deeper meaning.

“There were a lot of heavy perspective shifters for me,” he recalls. “I really just thought of the music in a different light. I look at it as a mass therapy now. I think I used to see it as this plight, like I was on a crusade or this creative odyssey. Now I see that it’s more Shamanistic. You’ve got to find some light—or sometimes dark, whatever’s right—and share it. I realized that was the heart of the Chet Faker project. And I felt like the world was hurting, so I thought, ‘I can do a small something to give people some joy.’”

What Murphy also recognized was that he was granting himself joy, too. He admits that before Hotel Surrender, he had never approached his process with such ease. This time, as the album title suggests, he surrendered to the music. “There was this, like, unconsciousness—not thinking, but just feeling, letting it come out and letting it steer itself,” Murphy says. “The great lesson for me was that I could write from a place of joy. I was also just being kind to myself. None of this music was hurting, it just felt good. It made me feel better, and it helped me be better.”

Ironically, Murphy’s ability to surrender came from leaving the Chet Faker name behind in 2016. Without giving himself the space to release music under his birth name and explore a deeper side of his musicality (that, as he puts it, “went into the depths of the darkness”), Murphy declares Hotel Surrender “never could have happened.” Even more ironically, he says that his namesake material “kind of represented this anti-me.”

“Chet Faker I’d only known as long as all these other people had known, and they all had these ideas about what it was,” Murphy asserts. “I just needed to kind of let loose. And I’m glad I did, because it allowed me to contextualize the Chet Faker project. It allowed me to expand and learn so many new things without having to deal with resistance based on what I built already with Chet.” Most importantly, “It got me really excited to make music again.”

It’s easy to hear Murphy’s newfound bliss on Hotel Surrender. The anthemic lead single, “Low,” features thumping beats and soaring vocals so infectious that even Murphy himself can’t help dancing. (“My butt starts to wiggle the second it comes on,” he quips.) A spirited vibe carries throughout the record, whether it’s in the funky piano grooves of “Get High,” the stimulating melodies of “Feel Good,” or the awe-inspiring instrumentation of “So Long So Lonely.”

With both Nick Murphy and Chet Faker living in tandem, Murphy suggests that he’s feeling a bit of a “ping-pong effect” for his next release. “Now that I’ve done a Chet thing, I feel like I want to do another NM thing,” he says. “But there’s a liquidity to it, and that has really allowed me to feel free with what I’m doing. I’m proud of this reputation I’ve got of being kind of inconsistent, in a way.”

While he’s uncertain of what the future holds, for now, Murphy is excited to bring Chet Faker back. Above all, he’s happy to be, well, happy.

“I think I’ve always been a feel-good kind of person, but I was self-conscious of it because I was aware that I could be judged for that,” he admits. “Cheesy or whatever be damned, I just don’t care anymore. If someone thinks it’s lame, I feel bad for them. Because I know how good it can feel if you just let go.”

He adds, “To write truly happy music, you’ve got to really get to know your own sadness. And that’s the work that got me here. I’ve had enough of the misery.” 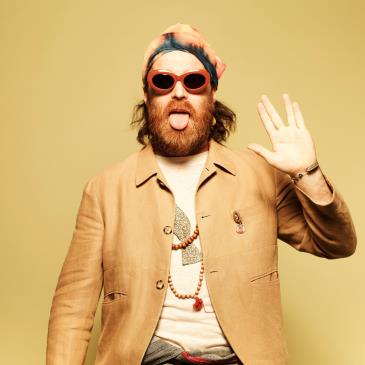