BELLY UP ASPEN IS OPEN AT 100% CAPACITY WITH NO MASK OR SOCIAL DISTANCING REQUIREMENTS.

PROOF OF VACCINATION OR A NEGATIVE COVID TEST ARE REQUIRED FOR ENTRY.

At least 80% of attendees must be fully vaccinated 14-days prior to the show, the remaining attendees can take a COVID test within 72-hours of the show. AT HOME TESTS ARE NOT ACCEPTED. Shows have "vaccinated" and "negative test" ticket types. Attendees must buy the ticket type that corresponds with their day of show status.

ALL AGES: 18+ with valid photo ID. Under 18 must be accompanied by a parent or guardian.

Reserved seating is available for $151 and guarantees a seat in the reserved section. If necessary, groups will be paired together at tables. Seating is based on time of purchase and the configuration of groups.

There is a ticket limit of 2 GA OR 6 RESERVED per customer based on address, credit card, email address, or other information. Multiple accounts may not be used to exceed these ticket limits. Limits for each show may vary and are listed on the individual show purchase page.

Orders exceeding published limits, or any tickets purchased for resale, or the resale or attempted resale of any ticket at a price greater than face value is a violation of our ticketing policy and we may cancel a portion or all of such orders without notice.

Ticketing violations may result in the  prohibition of future ticket purchases. In each such case, service fees charged for the purchase of tickets may be retained by Belly Up Aspen.  We reserve the right to change the delivery method from Digital Delivery to Will Call for release on the night of the show.   Supporting acts may be changed or cancelled without notice, however such change or cancellation is not grounds for refunds.

Tickets purchased from any source other than bellyupaspen.com or seetickets.us may not be valid and in such case, you will be denied entry to the show.

Inquiries should be made to ticketing@bellyupaspen.com.

ALL SALES ARE FINAL AND WE DO NOT OFFER REFUNDS OR EXCHANGES, EXCEPT FOR CANCELED OR POSTPONED EVENTS (REFER TO SPECIFIC EVENT FOR DETAILS).

Marriage, birth, death, departure; for Dispatch, the only constant these past few years has been change. Add to that an exceedingly tense political climate, long-overdue reckonings on racial justice and gender equality, and a runaway global pandemic, and you’ve got an idea of what’s been fueling Chadwick Stokes’ and Brad Corrigan’s writing lately.

“It’s a scary time,” says Corrigan, “but it’s also a super inspiring time. I think people are realizing now more than ever how important it is to be fully present and engaged with what’s happening, how much we all belong to and rely on each other.”

It’s that spirit of collective awakening, of embracing change in all its pain and beauty that defines ‘Break Our Fall,’ Dispatch’s extraordinary new album. Marking the band’s eighth studio release, the songs on this record speak not only to the band’s personal evolution, but to human nature itself, charting a course from denial and resistance to growth and acceptance through deep introspection and empathetic character studies. Heady as that all may sound, the music is pure Dispatch, blending infectious roots rock with hints of reggae, folk, and blues, and the production is similarly lean and energetic, leaving plenty of space for some of the group’s most pointed, political lyrics to date. The result is a timely and essential album from a band still breaking new ground two-and-a-half decades into its storied career, an ode to resilience and survival that manages to find hope and joy on even the darkest of days.

“Everyone in this country has been facing some kind of turmoil these last four years,” says Stokes. “As fathers of young kids who worry about what kind of world we’re leaving behind, as people who’ve lost family and friends to suicide and addiction, as bandmates navigating this transition from trio to duo, I think that feeling of everything being in flux was particularly acute for Brad and me. Writing’s always been the way we’ve made sense of the world, though, so that’s what we did.”

Making sense of our often-incomprehensible world has been at the core of Dispatch’s mission since the very start, when Stokes and Corrigan were still just students at Middlebury College in Vermont. Over the course of a slew of acclaimed studio and live albums and countless tours and festivals, the band would go onto become one of biggest success stories in independent music history, selling out three nights at Madison Square Garden and drawing over 100,000 fans to a massive outdoor show in their adopted hometown of Boston without any traditional radio or major label support. Rolling Stone called the group “roots-rock heroes,” while Billboard praised their “seamless harmonies, ragged edges and breezy attitude,” and SPIN hailed the band’s “remarkable renaissance.” Throughout their rise, Stokes and Corrigan took every opportunity to use their success for good, launching charitable organizations to fight poverty and mass incarceration, raising funds and awareness for environmental causes on the road, and even traveling as far afield as Nicaragua and Zimbabwe to work with children and communities in need.

“A lot of this new album is focused on what’s happening in America right now,” says Corrigan, “but it’s also really influenced by the experiences we’ve had outside of the country. Getting to know people who live in these desperately poor circumstances but still manage to smile and laugh and love and treat each other generously, that’s a life-changing thing. It teaches you what’s really important—community, family, cooperation, respect, kindness—and it makes you want to stand up for those things even more at home.”

While the band traditionally steered clear of anything too sharply political for much of its history, recent years have seen a shift towards more topical songwriting, and ‘Break Our Fall’ finds Stokes and Corrigan more explicit and outspoken than ever.

“Writing about the political climate and the issues that we care about has been really liberating for us,” says Stokes. “From the start, our core motivation for being in a band was to speak up about the things that really mattered to us, and I think that our experiences these last few years have really crystallized that.”

Though the heightened political stakes of the present moment had a major impact on the group’s direction, they were far from the only dramatic changes that helped shape ‘Break Our Fall.’ In the span of less than a year, Corrigan got engaged, married, and became a father for the very first time. Stokes, meanwhile, welcomed his third child into the world, only to tragically lose a close family member to suicide just a few years later.

“We were both processing all of this personal joy and despair and growth and loss along with everything else going on in the country at the same time,” says Stokes. “Hundreds of thousands dead from COVID, the killings of George Floyd, Ahmaud Arbery, and Breonna Taylor, the climate crisis, #MeToo; there was just a collective pain unlike anything we’ve ever experienced.”

Stokes and Corrigan tapped directly into that pain in the studio, working with frequent collaborators Mike Sawitzke (Eels) and John Dragonetti (The Submarines) to craft a wide-ranging collection all about coping and catharsis. The album works its way through a litany of modern fears and frustration on the driving “May We All” and laments the direction of the country in no uncertain terms on the simmering “All This Time” (listen closely for soulful vocal contributions from The White Buffalo). Reality sets in with the heartache of missed opportunities and lost loved ones coming into sharp focus on songs like the bittersweet “As Old As I” and epic “Connie Hawkins,” which tips its cap to everything from Tom Petty and Bruce Springsteen to The Cars and Violent Femmes. By the time fans push play on the soaring title track, a change is in the air, and grief and helplessness begin to give way to hope and determination.

“I wrote the title track about someone very close to me who was always there to break everyone else’s falls,” says Stokes. “His passing left me wondering what would happen without him, and the answer, I realized, is that we’d all have to step up and be there for each other. And I think that’s the case with the entire country right now. We’ve all got to look out for each other so we can bounce back from the ugliness of this moment and not just shatter into a thousand little pieces.”

The pendulum swings back towards optimism with the stream of consciousness “Elevator Operator” and waltzing “Born On Earth” making peace with what lies beyond our control and the dreamy “Stoned Enough” finds transcendence in human connection and ecstatic closer “Pour Into You” recognizes that, despite all our brokenness, love remains, and always will.

“We wanted to walk people through the feelings of sadness and anger and loss we’ve all been experiencing lately and take them to the other side,” says Corrigan.

It’d be a lofty goal at any time, let alone coming off of the brutal year we’ve all just bruised our way through, but that’s no concern for Stokes and Corrigan. At the end of the day, Dispatch doesn’t just believe in the impossible, they’ve made a career of achieving it. 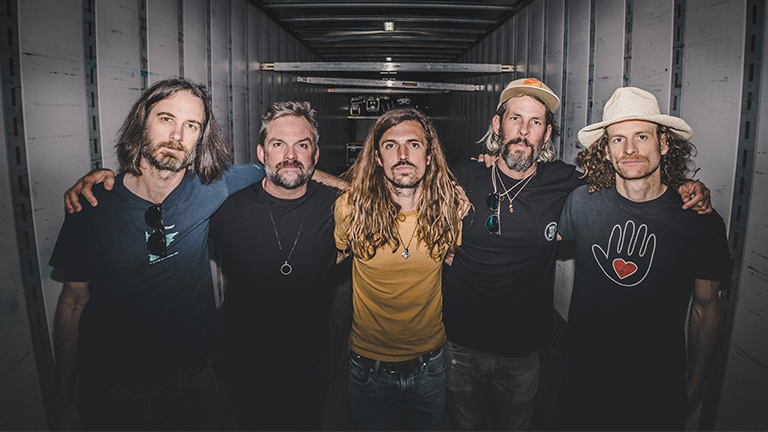