Buzzy Martin and the Trespassers (Benefit for Kids and Fire)

BUZZY MARTIN and THE TRESPASSERS  a SHOWCASE, LIVE VIDEO SHOOT & CONCERT FOR KIDS AT RISK

Until a few years ago Buzzy Martin was one of the Bay Area’s best kept secrets
who won the respect of some of the biggest names in the music world, but hadn’t
yet found widespread recognition but that changed when Buzzy’s award winning
Penguin book, DON’T SHOOT! I’M THE GUITAR MAN 2010 based on his
teaching a music program to the inmates at SAN QUENTIN STATE PRISON and
AT RISK YOUTH IN JUVENILE HALL was filmed by PRODIGY MOTION
PICTURES and turned into a movie called, GUITAR MAN that has already won
11 awards in 2019 at Indie film festivals plus Buzzy has written over 70 songs with
a number of them being played on Indie radio stations around the world. Buzzy
also wrote 15 prison based songs; 3 that are in the movie’s soundtrack (I’LL BE
COMING HOME FOR XMAS, COLD HARD PRISON GAME AND STATE
PRISON NATION.)

Buzzy Martin has been performing music professionally since he was 15, then at
23 moved to Northern California opening shows and sharing the stage for the last
40 years with the likes of SAMMY HAGAR, THE DOOBIE BROTHERS, PAM
TILLIS, SAMMY KERSHAW, LEON RUSSELL, BEN HAGGARD, DAVE
MASON to name a few.

Then there is The TRESPASSERS……………

Their sound is the refreshing return of the two drummers Americana Blues
inflected back beat with some country rock n roll of Mr. Casey Van Portfleet
and Mr. Micki Singer while Mr. Mark Chole is holding down the blistering groove
on bass while singing back up vocals. Think of the SILVER BULLET BAND
crossed with the DOOBIE BROTHERS spiced up with the country southern
tradition of the ALLMAN BROTHERS meets the E STREET BAND, then add
MR. Richard Silletto’s lead guitar playing reminiscent of ROY BUCHANAN and
DAVID LINDLEY, you’ve got the picture.
BUZZY MARTIN’S mix of stellar musicianship and songwriting alternating with
blistering sounds coming out of the TRESPASSERS rocks the stage but when
Buzzy brings it down with his song, PRISON CELL, you can hear every breath in
the room, then as the band launches into another Buzzy song, the infectious
WELCOME TO SAN QUENTIN, there is not one person who can stay seated. 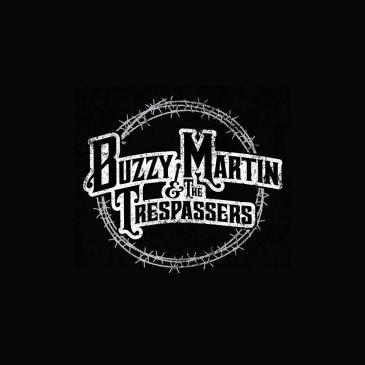 Show Map
View 230 Petaluma Ave in a larger map
We use cookies to provide you with the best experience possible. By using See Tickets, you accept our cookie policy.
Accept
ftr1:15.6271