The Maui Celebrity Series, Inc. at The Maui Theatre

After successful shows featuring William Shatner and Roseanne Barr, David Spade, and Paul Rodriguez... The Maui Celebrity Series Presents Brian Evans and Jake Shimabukuro. Jake Shimabukuro is recognized as one of the world's most exciting and innovative 'ukulele players and composers. Lightning-fast fingers and revolutionary techniques, this young ‘ukulele virtuoso is known for his ability to play everything. His virtuosity defies label or category. Playing jazz, blues, funk, classical, bluegrass, folk, flamenco, and rock, Jake's mission is to show everyone that the ukulele is capable of so much more than traditional Hawaiian music. Expect to hear and see an exciting music mix of hot n’ fast jazz and rock classics, island favorites and phenomenal ability. Crooner Brian Evans is considered by Grammy Magazine as one of the "premier new crooners of this generation," and is hailed by critics from The Los Angeles Times to USA Today. He is the opening act for such superstars as Jay Leno, Social Distortion, Joan Rivers, Dionne Warwick among others, and is the co-creator of "Horrorscope," a story he co-wrote with Ahmet Zappa (son of legendary rock musician Frank Zappa), which is headed for the comic book circuit to the big screen. If you just happen to recognize Brian's face, it may be from his work on TV shows like "Full House". Evans is also working on his major label debut. There will also be an opening act for this event. The show is sponsored by Enterprise Rent A Car, Hawaiian Airlines, Maui Sunseeker, Royal Lahaina Resorts, T-Mobile, and Coastline Limousine. The show is produced by Brian Evans, Andrew Biltz, and Arman Zajic for The Maui Celebrity Series, Inc. Doors will open at 9:00 PM. 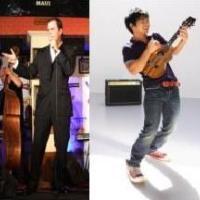