For his fourth album, Keep 'Em on They Toes, Brent Cobb is giving his songs the space they need to speak for themselves, a reflection of his own decision to write about the way he sees the world.

"My last couple of albums have been about people and places, and I wanted this album to be about thoughts and feelings," he says. "I think it's pretty easy to look around and see what's going on in the world. With my heroes and the people that I listen to, it seems like the natural progression for me."

Yet at his core, Cobb still writes country songs, so there's a continuity between Keep 'Em on They Toes and past projects like 2016's Shine on Rainy Day (a Grammy nominee for Best Americana Album) and 2018's Providence Canyon, named for a gorge near his hometown of Ellaville, Georgia. After living in Los Angeles and Nashville to develop his music career, Cobb and his family moved back to Georgia a few years ago -- a decision that he says absolutely affected his songwriting.

"It's funny because the last two albums were about me growing up in Georgia, and now we're back here," he says. "I'm not writing about missing it anymore, so the songs are coming from within now. It's not a longing for home, it's what I think about now that I live down here."

Cobb and members of his band recorded the project in Durham, North Carolina, with producer Brad Cook. "All of his records sound so sparse, but there's a lot of space being taken up at the same time," Cobb says. Inspired by the spaciousness of classic country albums like Jerry Lee Lewis' 1977 LP, Country Memories, the new project allows the listener to hear everything that's going on, yet the songs remain the star of the show.

Throughout Keep 'Em on They Toes, Cobb is diplomatic rather than political -- although he's been told numerous times over the years that artists shouldn't voice their opinions. He disputes that notion. "I'm a songwriter for a living," he says. "My job is to write about what I see and think and feel and hear."

Cobb and his wife Layne co-wrote the title track as if imparting wisdom to their newborn son, yet he believes that anybody can get on board with its message: "The best thing you can do / When the ignorance shows / Is walk on to your own beat / Keep 'em on they toes." Cobb says he wrote most of the other songs around that song. But... They Toes? "That's just how country folks talk," he says.

Next, in "Shut Up and Sing," he reflects on the relationship between artists and social media followers with a clash of fiddle and harmonica conveying the static of two differing opinions. That's followed by a simple country song called "Good Times and Good Love," which he co-wrote with longtime buddy Luke Bryan (who also plays piano on the track). What ties these two songs together, Cobb believes, is the notion that nothing is going to last forever. Why not enjoy the time we have left?

Still, the obligations of adulthood add a sense of dry humor to "Sometimes I'm a Clown," while "This Side of the River" serves as a mature reflection on this time in his life. And for those who feel the need to tell him -- and everybody else -- how to live, he poetically brushes them off with "Dust Under My Rug."

Yet there isn't a preachy component to Keep 'Em on They Toes. Instead it captures the mindset of a man who values a simpler time despite living in a modern world. One of the album's liveliest songs, "Soap Box," was written by Cobb and his father, Patrick Cobb, who instilled an early love of music and songwriting into his son. Nikki Lane provides a "perfectly imperfect" harmony part, giving the track a cool, casual vibe.

In contrast, Cobb built the track of "When You Go" around his acoustic guitar, underscoring the song's message of letting go of unnecessary things. "It's like, man, we've only got one life. A lot of things are important, and of course we've got a world to leave behind for our kids to inherit, but we ain't gonna be able take some of the things with us. We need to maybe not sweat the small stuff," he explains.

While "The World Is Ending" fits into the overall feel of the album (not to mention the COVID-19 pandemic), it's actually from 2011, written in response to those who predicted a doomsday when the Mayan calendar ran out in 2012. The cosmic imagery of the song is contrasted with the down-home life he portrays in "Little Stuff," the final track on the album as well as Cobb's personal favorite.

"It fits because -- I'll be honest with you -- over the last couple of years I've eaten a lot of mushrooms. I've had a crazy experience on mushrooms about how connected everything is," he says. "I actually went down to a little creek and tripped. I thought, 'All we're here to do is sit and watch the sun rise and set, for as long as we're here.' You've got your opinion, I've got mine, but what I think is really important is taking a trip to the river and getting right with whatever your center is."

Even so, Cobb forges a personal connection throughout Keep 'Em on They Toes, just as his musical heroes have done before him.

"To me, listening to this album feels like I'm sitting there with somebody, having a conversation," Cobb says. "I would hope that it feels like sitting with an old friend you haven't seen in a while. There's nothing like being alone and listening to an album that is quiet and conversational -- like those old records by Jerry Lee Lewis, Roger Miller, or Willie Nelson. I hope my music is that way to somebody now."


Solo artist. Frontman. Behind-the-scenes songwriter. For more than a decade, Adam Hood has left his mark onstage and in the writing room, carving out a southern sound that mixes soul, country, and American roots music into the same package.

It's a sound that began shape in Opelika, Alabama. Raised by working-class parents, Hood started playing hometown shows as a 16 year-old, landing a weekly residency at a local restaurant. He'd perform there every Friday and Saturday night, filling his set list with songs by John Hiatt, Steve Warner, Hank Williams Jr, and Vince Gill. As the years progressed, the gigs continued — not only in Alabama, but across the entire country, where Hood still plays around 100 shows annually.

These days, though, he's no longer putting his own stamp on the songs of chart-topping country stars. Instead, many of those acts are playing his music.

Little Big Town, Miranda Lambert, Anderson East, Frankie Ballard, Josh Abbott Band, Lee Ann Womack, and Brent Cobb are among the dozens of artists who've recorded Hood's songs. An in-demand songwriter, he signed a publishing deal with Warner/Chappell Nashville and producer Dave Cobb’s Low Country Sound in 2016, while still maintaining a busy schedule of tour dates in support of his third solo release, Welcome to the Big World. Two years later, he continues the balancing act with his newest album, Somewhere in Between.

A showcase for both his frontman abilities and songwriting chops, Somewhere in Between also shines a light on Hood's strength as a live act. He recorded most of the album live at Nashville's Sound Emporium Studios over two quick days. Teaming up with producer Oran Thornton (Angaleena Presley's Wrangled, Miranda Lambert's Revolution) along the way, their goal was to create something that reflected the raw, real sound of his concerts, where overdubs and unlimited takes are never an option. Also joining Hood in the studio were bassist Lex Price, guitarist and co-writing partner Pat McLaughlin, and drummer Jerry Roe, all of whom captured their parts in a handful of live performances. Hood tracked his vocals at the same time. Stripped free of studio trickery and lushly layered arrangements, Somewhere in Between is an honest, story-driven record — the sort of album that relies on craft, not gloss, to pack its punch.

It's also an album that finds Hood telling his own story. A dedicated family man, he wrote "Locomotive" after watching his young daughter develop her motor skills while playing with a set of blocks. A road warrior, he penned songs like "Downturn" about a life filled with wanderlust and long drives from gig to gig. A native Alabaman who still lives in the Yellowhammer State, he celebrates America's rural pockets with "Keeping Me Here" and "Real Small Town," two songs that fill their verses with images of main streets, open landscapes, hard times, and good people.

Somewhere in Between may be autobiographical but there's a universal appeal to this music. A true blue-collar songwriter, Hood shines a light on the everyday experiences — from family to friends to the thrill of Friday nights — that we all appreciate. It's extraordinary music about ordinary lives, performed with conviction by a man who continues to balance a critically acclaimed solo career with his commercial successes as a songwriter. 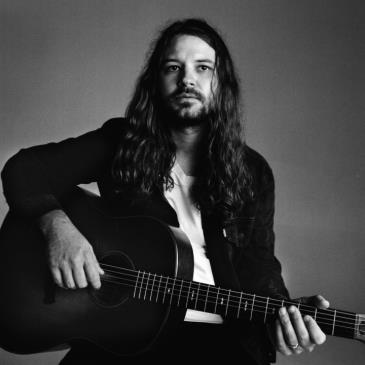