Processing...
Tickets
Tickets are available at the door for $15

Following the release of Resistance  in 2018 via Brainfeeder, Coleman embarked on a thirty(30)-city tour supporting Flying Lotus in 2019, laying his interplanetary dance grooves down for eager audiences. This project represents a new chapter in the Funk dynasty that spans a multitude of generations and genres, and honors their ethos of freedom and experimentation in his search for Funk’s future.  Coleman’s bold voice reminds us that great music can also contain fun & whimsy, no other member of the current generation has made such a strong commitment to expanding on the psychedelic grooves of decades past, and with so much finesse.

“For those accustomed to Coleman’s role laying the foundation for expansive spiritual-jazz explorations in Kamasi Washington’s band, it’s revelatory to hear him so spry on his feet and down to get down. If his work with Washington contains all the weight and gravitas of Sunday church, Coleman’s Resistance has all the fun, breeziness- and yes, sunlight- of an afternoon church picnic,” said Andy Beta of Pitchfork. At a typical Brandon Coleman show, it’s common to get the entire Sunday extravaganza.

INTELLECTUAL BLACK SPACE, which will be released later in 2021, is a cinematic Funk odyssey featuring Coleman on keyboards, keytar & vocoder accompanied by electric bass and drums.

R.A.N (Ryan Glatt, Austin Gatus, and Nick Henry) are a production trio formed in 2015 through the jazz studies program at the UCLA Herb Alpert School of Music.
Their most recent collaborative project, "Countdown", was released this year as a single off Austin Gatus' upcoming smooth jazz album. Since it's release, the single has garnered radio play on KRHQ Coachella Valley, as well as placements on the top smooth jazz streaming playlists.
https://open.spotify.com/track/2UHMovx6vLT4VLV04xelQZ?si=35f6585f263d45aa
The members of the trio have worked with artists spanning different genres, including Kenny G, Rufus Wainwright, Average White Band, Chris Miles, LOVEONFRIDAY, and more. 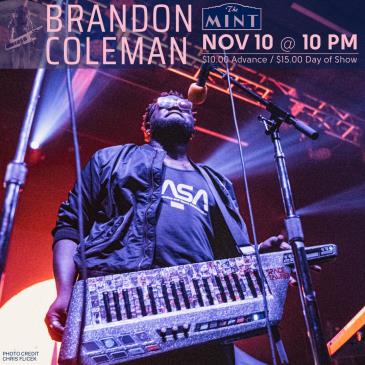