Jamil Rashad, a/k/a Boulevards, is the embodiment of funk. Taking queues from pioneers such as Prince, Rick James, and Earth Wind & Fire, Boulevards seamlessly delivers cheeky, party-themed jams that range from raw and risque to soulful. From an early age, Jamil’s father, a R&B Radio DJ, exposed him to jazz, blues, and R&B. This pushed him to get involved in the city’s local music scene early on in his youth. In his teens, he embraced the punk and metal scene in his hometown of Raleigh, NC; genres that would later go on to influence Rashad’s songwriting by way of their tight technical precision and power. After an art school education and several stints in local bands, Jamil rediscovered and returned to his first true love: Funk. Boulevards has shared the stage with artists such as Nile Rodgers of CHIC, Rhye, King Gizzard and the Lizard Wizard, and Mac DeMarco. He has also performed at top boutique festivals such as Montreal Jazz Fest, Pickathon, KABOO, and Hopscotch Music Festival.

American soul singer Danielle Ponder is both empowering and a powerhouse. In 2020, NPR described her music as anthemic while compassionate; soulful, while bold and strong. She reverberates with a goosebump-inducing passion,." Danielle attended Northeastern University where she received her Juris Doctorate. For 5 years, Danielle worked as a public defender where she provided criminal defense to the indigent community. While working as a public defender, Danielle also toured Europe and scored opening spots for St. Paul and the Broken Bones and George Clinton. In 2018, after five years as a public defender, she made the gutsy decision to pursue her No.1 passion -- music. In 2021, Danielle performed at the Newport Jazz Festival where her performance was hailed as one of the stand out performances of the event. Danielle is preparing her first self-produced EP, Some of Us Are Brave, set for release in early 2022 on Future Classic. Danielle continues to advocate for criminal justice reform and has been an influential leader in the Black Lives Matter movement in Rochester, NY.

If one word could musically describe The Bozwellz it would be: Diversity! It seems they are not bound by any certain style. Sure, they have a soulful approach, but it transfers to all forms of music, which is unheard of. They have huge backgrounds in Gospel, Soul, R&B, Rock and Country. Because of this, they are in high demand as producers, studio musicians, and singers at Capricorn Studio in Macon, Ga. The Bozwellz music is unique, yet very familiar to the soul. It’s like a New Orleans style Gumbo. You take various ingredients that taste one way by themselves, however after putting them all together you get something extraordinary. That is the best and only way to describe The Bozwellz. 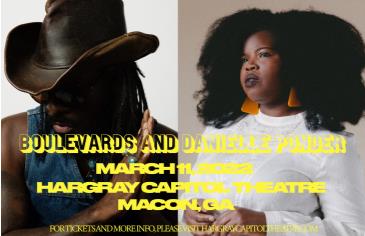