After selling millions of records and logging thousands of miles on the road, GRAMMY award-winning band Blues Traveler continue to chart new musical directions evident on their upcoming record Blow Up The Moon. A clever collaboration between various artists, Blow Up The Moon sees Blues Traveler keep an open-minded perspective on making music and enlists an eclectic mix of songwriters influenced by the bands remarkable 25+ year career.

“We wanted to experiment with co-writing since we usually try to do everything in-house, in this misguided homage to The Beatles,” says singer John Popper. Blow Up The Moon allowed Blues Traveler to expand their musical palette while holding the foundation of their distinct and explosive brand of rock. “We found quality writers to see what they could bring to us as a band, and also people who could see our strengths, something that’s hard to see for yourself.”

Blues Traveler plan to spend all of 2015 on the road and are looking at more collaborative projects in the future since, as Wilson said, “There are a lot of different ways to write songs, and so many different ways to work with other people and arrive at the same place. It was reaffirming, but also instructive in teaching us how to say something simpler. When you listen to what came out of it, it’s something to be proud of.” 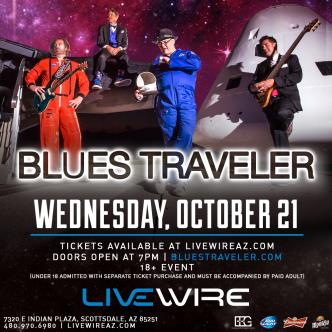