An evening with Blame Sally

ABOUT:
If you sense a slight incongruity in the title of Blame Sally’s Speeding Ticket and a Valentine, rest assured that it’s as purposeful as the life it describes is random. The album lifts its name from a line in the bridge of the hard-charging leadoff single, “Living Without You,” which describes a day—or maybe entire existence—that’s “sweet and sour at the same time/mink and a porcupine/ speeding ticket and a valentine.” Clearly, this is a band that knows its oxymorons.

The four women who make up the Bay area-based group have some experience with improbable complexities and contradictions. Almost everything about their history is contrary to conventional wisdom. For one thing, they put their individual careers aside to start Blame Sally when they were in their late 30s and 40s—the age at which bands are traditionally supposed to break up and begin solo careers. For another, this is obviously an all-female band—“girl groups” usually being the novel province of youthful upstarts, not mature singer/songwriters. Splitting the frontperson status among three of four members goes against the agreed-upon maxim (agreed upon by everyone but the Beatles, anyway) that every group needs a single strong focal point. And didn’t they get the memo that women in particular in show biz are supposed to be packing it in at this point, not making fresh introductions?

Actually, they did get that memo, and put it in the proverbial circular file. 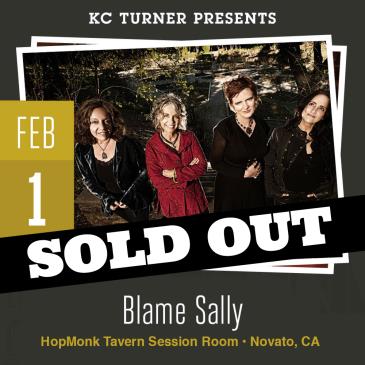