Throughout their career, Blackberry Smoke—vocalist/lead guitarist Charlie Starr, guitarist/vocalist Paul Jackson, bassist/vocalist Richard Turner, drummer Brit Turner, and keyboardist Brandon Still—has embodied Georgia’s rich musical legacy, honoring the people, places and sounds of their home state. As the band celebrates their 20thanniversary this year, their reverence for Georgia has only deepened. On their latest album, You Hear Georgia, the follow-up to 2018’s critically acclaimed Find a Light, Blackberry Smoke is further celebrating these roots with 10 new songs that feel like Georgia, accented by the addition of Grammy-winning producer and fellow Georgia-native, Dave Cobb (Jason Isbell, Brandi Carlile). “Dave and I had spoken for the last few years about making a record,” Starr says. “Finally, it worked out, our schedule and his schedule, and we said, yes—let’s make a record. "Blackberry Smoke worked quickly, spending just10 days at Nashville’s famed RCA Studio A, Cobb’s home base since 2016. The band recorded live on the floor, giving You Hear Georgia a crisp, outgoing feel. Like other Blackberry Smoke efforts, this album leans into well-crafted Southern rock driven by jagged guitar riffs and rich instrumentation, as the band layers on rollicking piano (“Live It Down”), funky rooves (“Hey Delilah”), and introspective acoustic sounds (the stripped-down, folk-leaning “Old Enough to Know”).“He’s a very laid-back guy with excellent ideas, but he’s very enthusiastic about making music, and he’s right in there with you having a ball,” Starr says. "He’s a calming presence and so knowledgeable musically, and he knows how to get what he wants in the studio. I don’t know if we could have made a record in 10 days with everyone, and that definitely speaks to Dave’s ability. "Working with Cobb was the right move, as his approach brought warmth and looseness to the proceedings, while his easygoing demeanor and songwriting background allowed him to provide perceptive insights into this particular batch of Blackberry Smoke songs. In fact, the producer encouraged Blackberry Smoke to pursue the title track after hearing Starr noodling on the idea in the studio. "He heard me play it, just the riff, and I sang a little bit of a verse and he said, ‘What’s that? What’s that?’ "Starr says. “I said, ‘It’s just something that’s not finished yet.’ And he said, ‘Well, finish it, because we want to record that too.’ So I went back to the hotel room and finished it, and there we go.”
No Refunds
Rain or Shine 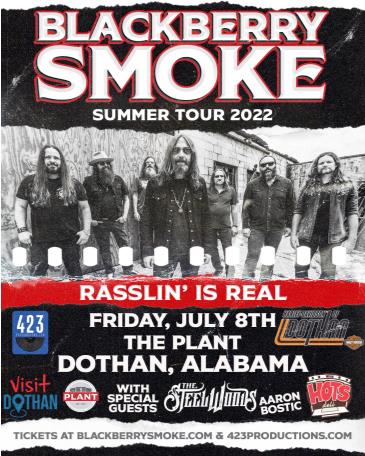