In the 1980s, Tash was taken under wing by legendary DC-area blues guitarist Steve Jacobs, who began schooling him in the genre’s roots. In 1988, after some years in the rock ‘n’ roll trenches, Tash founded the Bad Influence Band and over the next decade their popularity around the Nation’s Capital area steamrolled. By the time their 1st CD, Where We Been was recorded, the group was a six-piece with a reputation for great live shows and a vast repertoire of classic and modern blues.

Michael has appeared on hundreds of club and festival stages, including the House of Blues in Las Vegas and the Chesapeake Bay Blues Festival. Winning songs, musical dynamism and strong presence has led to opening slots on bills with a coterie of stars: Heart, Buddy Guy, Shemekia Copeland, Candye Kane, Deanna Bogart, Toronzo Cannon, Roomful of Blues, and Albert Castiglia, among others.

Tash is one of the East Coast’s most respected blues guitarists and songwriters, and has been inducted into the Northern Virginia Blues Hall of Fame as well as multiple nominations for the Washington Area Music Association Best Blues Instrumentalist award. He is currently endorsed by Epiphone Guitars, GHS Strings, Quilter Amps, Seymour Duncan Pickups, StageClix Wireless, Peavey Electronics, Electro-Voice Speakers, Ethos Custom Leathers, Levy's Leathers, PedalSnake cable systems and Gator Cases. These endorsements include print ads in guitar magazines, social media posts, as well as personalized pages and inclusion on the official websites of these companies. 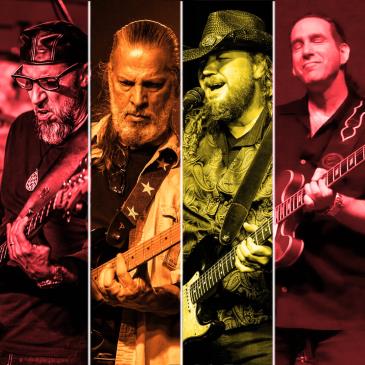