“Big Band Nights” is a monthly series featuring different big bands at different venues throughout LA.  Join us for a special evening of original music from the finest big band composers and musicians in Los Angeles; curated by Lauren Elizabeth Baba and hosted by her 17-piece big band, theBABAorchestra.  If you’ve never experienced a live big band, this one’s for you!
If you'd like to make a reservation to secure your table, please visit: https://themintla.com/dinner-reservation/

Jazz/Classical bassist and composer Marlon Martinez has demonstrated his virtuosity while performing with a wide range of artists, from Stewart Copeland to Gustavo Dudamel.
Marlonius Jazz Orchestra propels the 20th century big band tradition through 21st century culture. Marlonius Jazz Orchestra highlights current artists in jazz and commercial music by performing new compositions by Martinez, and revitalizing the music of jazz legend Billy Strayhorn.
Dedicated to introducing the music of Billy Strayhorn to newer audiences, Martinez will begin 2022 with a recorded tribute to Strayhorn at the Colburn School for his Amplify Series residency in March. In collaboration with Billy Strayhorn Songs Inc, Marlonius Jazz Orchestra will perform recently discovered compositions, and unveil largely forgotten gems by the unsung pioneer and giant of modern jazz.
https://www.marlonmartinezmusic.com/marlonius
https://www.instagram.com/marloniusmusic/

The VDE Big Band is one of the best young professional big band from Los Angeles. This band has been founded and led by Dutch jazz drummer Kevin van den Elzen, who has been living in LA for the past 6 years.
The members of the VDE Big Band are among the best jazz- and session players on the West Coast such as Dave Richards (Grammy Award nominated trumpet player and composer), Kim Richmond (Bob Florence, Louie Bellson), Bob Sheppard (Steely Dan) and Ido Meshulam (Grammy Award winning trombone player for Billy Childs).
The VDE Big Band has performed at every major venue in the Los Angeles area and has performed at high schools, festivals and clinics.
The band has performed with John Clayton, Bob Mintzer, John Beasley and Dick Oatts as guests.
The leader and drummer of the big band is Kevin van den Elzen. Originally from the Netherlands, he has worked with Dick Oatts, Bob Mintzer, Russell Ferrante, New York Voices, Larry Carlton, Bill Holman, Dave Slonaker, Josh Nelson, Nick Mancini, Jesse van Ruller, Joris Roelofs, James Carter, Paquito d’Rivera and many more. He has lead big bands in Holland and the US for the past 9 years, such as the Dutch Concert Big Band in Amsterdam and the VDE Big Band in LA. He worked with other bands such as the Bill Holman Big Band, Mike Barone Big Band, Brussels Jazz Orchestra, Bravo Big Band, Monkestra, the Budman Levy Jazz Orchestra. He won 4 scholarships to attend the Thornton School of Music at USC with Peter Erskine. He graduated with honors in 2017 and has been steadily working in the LA area and internationally.
Further info is available at:
www.kevinvandenelzen.com 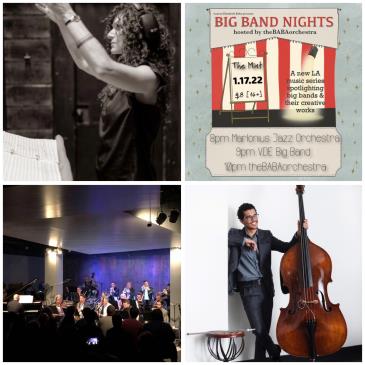