International DJ and producer Ben Nicky is one of trance music’s household names. The UK-based artist has an impressive collection of releases on Ultra, Spinnin’, Armada and more and has played at music festivals around the globe.


The trance artist has support from some of the biggest icons in the world of trance and house music, including Armin Van Buuren, Paul Van Dyk, Tiesto, Andy Moor, and BBC Radio One’s Judge Jules. Ben Nicky was recently acknowledged by Armin Van Buuren as being “one of the hardest working artists in the trance scene”, as well as being one of Armin’s most played/requested artists on his radio show.


Ben has traveled the world and performed in many countries including Russia, USA, Malta, Germany, Poland, Ibiza and more. He regularly performs with big league names like Ferry Corsten, Above and Beyond, Markus Schulz, and Pete Tong. He has an album in the pipeline along with his discography of chart topping singles. With all of these accomplishments and milestones under his belt, he has proved himself an asset in the trance scene and has made moves towards his impending ascent into the trance hall of fame.

Only club in Hollywood open until 8AM

Once Avalon reaches capacity, those holding ticket(s) will be admitted before those in the general admission or guest list lines, but you must wait for people already admitted to leave the club to reestablish available capacity. 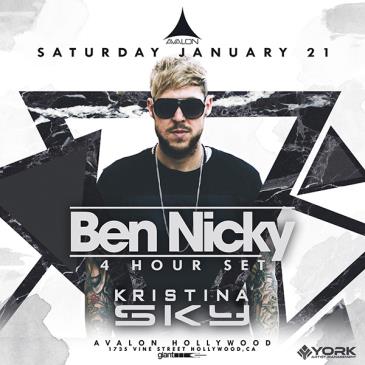